Meanwhile...
While all eyes are on the mayhem in Ferguson, it appears that China is  breaking up the Hong Kong democracy protests.
The timing is an utter coincidence, I'm sure.

1 You also have a world of spammers today. Ouch.

2 I'll step on them when I get home from work.  The spammers, that is.  Hong Kong and Ferguson are outside my bailiwick.

There is Only ONE Story Tonight Something, something, Presidential amnesty, something.
Not that I'm not appalled, but when everyone is looking at only one thing, it is often prudent to look around.
There may only be one story tonight, but there are other things that might be worth paying attention to.
First, some good news on the Ebola front, where it seems that the rate of new cases in Liberia and Guinea is no longer rising. While not lowering it is the first encouraging news out of those ountries since this calamity began.
Good news on the domestic Ebola front: there was some alarm regards a woman in New York who arrived from Guinea and was being monitored for the disease when she suddenly collapsed, bleeding from the eyes and nose and subsequently died. To everyones relief, the cause of death has been determined to be a heart attack. 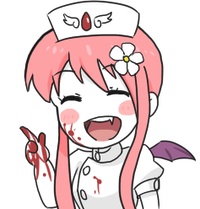 Ebola Tan says"My new favorite verb is Grubering!"
*********
Russian Bombers are now circling Guam from time to time.
Russia seems to be poking Scandinavia and the Baltic nations as well.
Meanwhile, Kasparov goes Godwin on Putin in the Washington Post.
With regard to Russia, this article at the Economist proposes that the Russian economy is much more fragile than is generally supposed (and it's not widely considered to exactly be robust). This does not necessarily mean a reduction of risk...a wounded bear wandering into ones yard is potentially a more dangerous thing than a healthy one.
******
China, it seems, does not like this years crop of Hollywood films either... 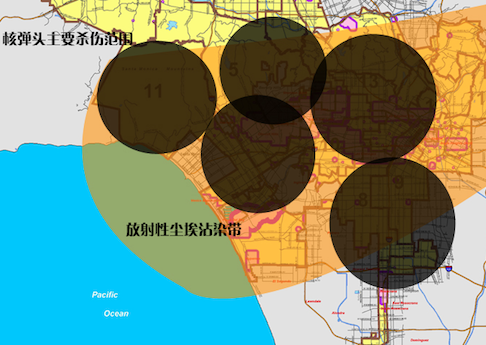 Actually,  the image of Los Angeles being nuked is from one of several articles touting the atomic mayhem potential of the People's Liberation Army posted in China's Global Times last year that are mentioned in this Defense News piece on China's rapidly modernizing nuclear arsenal.  One interesting tidbit...

The article notes that the survival probability for people outdoors in a 746 to 870 mile radius was zero. "Based on the actual level of China’s one million tons TNT equivalent small nuclear warhead technology, the 12 JL–2 nuclear missiles carried by one JIN nuclear submarine could cause the destruction of five million to 12 million people, forming a very clear deterrent effect.” [/quote]

This seems to imply that the MIRVs in the JL-2 submarine launched ballistic missile have a 1 megaton yield...6-50 times what is reported. This is not beyond the realm of possibility as the old W-56 warhead of the Minuteman had a yield of 1.2 megatons with a weight of 600-680 pounds depending on variant. The JL-2 is broadly comparable in size to the Trident, which can carry up to 10 of the heavier (but much less destructive) W-88 warheads. The difference in 'splody to weight ratio between America's 60's era warheads and the ones developed in the 80's may have to do with a decision to make the bombs as "clean" as possible to reduce global fallout. This seems to involve using a lead as opposed to enriched uranium casing in the bomb. The latter can double or even triple yield at the cost of a much greater amount of radioactive fallout (at least that is the impression given by open source info on the subject). If China is going all in for maximum yield, maximum fallout, their weapons would be more destructive than the US, UK and French weapons by 2-3 times for a given weight. This is probably less important than the contamination of the target country that is implied.
Xi Jinping says that he is going to crush the democracy protests in Hong Kong soon.
*********
There are 36 million slaves in the world.
********
Finally, on a much happier note, it looks like rice yields will soon be boosted by 30% or more.

1 Every time Western journos fall over backwards to report on Kasparov's pronouncements, I just have to ask what that noxious gasbag did exactly to make it happen. He has zero credibility. I would rather ask what Navalnyi says, crazy as he is. At least his opposition to Putin appears to be motivated by a genuine concern for freedoms in the country rather than crass opportunism and sucking money of gullible westerners and their NGOs.

2 Pete, Kasparov emerged from Cold War U.S.S.R. during a period in which Western journalists were completely given over to the idea that anything from the Soviet Union was superior than anything from the U.S.  A lot of that sentiment still carries on.  In the 80's, the Soviet Union was more technologically advanced than the U.S., according to the media.  Post-collapse, the lack of technological superiority was then better than the U.S's reliance on technology...which is a major reason why the press was so heavily invested in the Deep Blue chess matches.  Kasparov *had* to be better than the machine, not for humanism, but because the machine was American.

3 His chess prowess is quite good, for a human. I was just curious how he managed a transition to a respected politician.

4 I think this is rather profound.

So....What's Happening? First off, one of the 'Brickmuppet's Crack Team of Science Babes' has some thoughts on science reportage....

Of course the 'Science Babes' are just the imaginary braniac waifus of a lonely male blogger who has a sick fetish for smart girls, so it is likely that their supposed views on such microagressions are no different than any member of the macho women haters club....
Indeed, the maladroit neckbeard known as Suburbanbanshee has presumed to express thoughts on this as has noted woman hater Elizabeth Scalia. Misogynistic troglodyte Amy Alkon mansplains the situation and, of course the vaginaphobic Pope of patriarchal privilege, Sarah Hoyt, unleashes a glorious TL;DR of hateorade.
Also, there was something about a comet.
In other, obviously less important news:
The Russians, always eager to remind us that we are loved,  have decided to regularly send nuclear capable bombers to patrol the Gulf of Mexico.
In unrelated news PRAVDA is running the headline Russia prepares nuclear surprise for NATO.  It should be noted that the use of the words "nuclear" and "surprise" next to each other is generally frowned upon. However, there are always translation issues and the Muscovites probably have a different style guide. In any event, given the relative parity in acknowledged warheads the Russians are unlikely to do anything really stupid unless they think our deterrent is seriously unreliable for some reason.
In even less related news, soon we'll have 3 wrenches.
Concluding our chain of nonsequiters, Canada's National Post has an analysis of what Russia's goals actually might be.
With regard to China, a navy analyst who stated earlier this year that China was preparing for a "Short, Sharp, War" was rather publicly reassigned on the eve of the recent conference with China.

"If you talk about it openly, you cross the line and unnecessarily antagonize," Greenert said at a forum in Newport, Rhode Island. "You probably have a sense about how much we trade with that country. It's astounding. "

North Korea has launched a ballistic missile submarine.
In all seriousness the old Golf class boat is almost certainly not a cause for concern so it should not affect ones real-estate purchases in any way. However there are all sorts of other issues that might persuade one to overcome ones dread of dealing with a condo association in order to move into more secure environs. (Like they say....)

1 There have been some brilliant captioned images posted on Twitter on the whole #shirtstorm thing.