Keeping Informed
Via
Meanwhile...
India and Pakistan are having a tiff.

At least 18 soldiers were killed in a terror attack on an Army camp in Uri in Jammu and Kashmir on September 18. All four terrorists, who attacked the camp, were killed.

This did not occur in a vacuum..
Pakistan's defense minister, last week decided this an oppertune moment to clarify Pakistan's stance.

Amidst growing tension over Uri attack by Pakistani terrorists on Sunday, a video of the countryâ€™s Defence Minister Khawaja M Asif threatening to use nuclear weapon against India is doing the rounds on social media. The video shows the Pakistani defence minister telling Geo News: "If Pakistanâ€™s security is threatened, we will not hesitate in using tactical (nuclear) weapons.â€

And patience is running thin in India which has decided that they need to take action.

Prime Minister Narendra Modi after a fiery speech in Kerala where he blamed Pakistan for exporting global terrorism has now called for a briefing on the Indus Waters Treaty.

Oh Dear.
India and Pakistan have a bit over 100 nukes each.
Following a war between India and Pakistan, in which 100 Hiroshima-size (15 kiloton) nuclear weapons are detonated in the large cities of these nations, 5 million tons of smoke is lofted high into the stratosphere and is quickly spread around the world. A smoke layer forms around both Hemispheres which will remain in place for many years to block sunlight from reaching the surface of the Earth. One year after the smoke injection there would be temperature drops of several degrees C within the grain-growing interiors of Eurasia and North America. There would be a corresponding shortening of growing seasons by up to 30 days and a 10% reduction in average global precipitation.

I didn't know that India has the ability to stop the Indus River. That's usually extremely difficult.

The US can do that with the Colorado, with the Imperial dam. But that's a unique case; the Colorado by that point isn't much of a river because so much of it has been diverted.

2 That's how it is with the Indus too. That's WHY they have that treaty, because for a while India was diverting just about all of the river for irrigation...

3 I'm sort of worndering if we could belive the fallout models. The climate models turned out to be utter bunk, since we're emitting top of the line CO2 and the warming is way below the most favourable projections. Like literally stopped basically. Of course the fallout is much shorter term.

4 True, but these are very short term and based on observed phenomena like wind patterns,  volcanic eruptions and the Iraq Oil fires of the early 90's so there is at least decent data going in. I don't think it's as accurate as the tenths of a degree temperature gradient makes it appear, but it gives a good ballpark figure.

Meanwhile: The Ceasefire in Syria Continues Apace The U.S. may or may not have hit a Syrian army unit. The Russian's, who hit a U.S. airbase back in July have probably  hit an aid convoy. The Russian carrier is en route to the area, the Chinese have gotten involved. We have troops on the ground, in Syria, a country whose government we have said we are going to overthrow, which is an ally of Russia who also has troops on the ground protecting Syria by shooting at the Jihadists we are ostensibly backing while we fight the mostly different crazy-nuts jihadis in ISIS which Russia is also fighting without any coordination with us so Russian and U.S. troops are on opposite sides of a civil war, armed and shooting at people who are trying to kill them in an area in which at least two factions are using poison gas.
WHAT COULD POSSIBLY GO WRONG!?

(As an aside, the King of Spain technically carries a subsidiary title of Archduke, so we should probably guard him quite closely...just as a precaution.)

2 I heard he drives the Zamboni for the Maple Leafs.

3 He used to.  Now he vacuums the turf at the Rogers Center.

Remember The Rememberance On September 11, 1683 the Ottoman forces besieging the city of Vienna were on the verge of victory. The City, under siege since July 14, was starving, Ottoman engineers had greatly weakened the city's walls and its collapse appeared imminent. However that evening relief arrived in the form of an army from Hungary and one from the confederation somewhat misleadingly known as the Holy Roman Empire...They brought with them roughly 40,000 troops, not good odds against a force of 90,000 Caliphate troops that included a large number of Janissaries. However, the situation was dire and this was a final desperate attempt to turn the tide of this months long battle, for with the loss of Vienna the Islamic armies would have free reign throughout Europe. The enlightenment was about to be snuffed out.
Early on the morning of the 12th the allied armies were reinforced by 27,000 fresh Polish troops under John Sobieski, who bolstered the European forces as they pressed their attack against the Ottomans. Even with the reinforcements, Europe and had only a bit more than 2/3 of the Ottoman forces, however the Ottomans were also having to deal with the guard of the city they were besieging, which astutely chose this time to get very frisky.
By the end of the 12th, the Islamic forces were routed. Along with the Battle of Lepanto, the siege of Vienna is generally regarded as the end of the large scale Islamic expansion into Europe. September 11th, 1683 thus marks the end of the period when the threat of Jihadi conquest was a constant threat...over the previous thousand years, Western civilization had been pushed into a small peninsula on the ass end of Asia which, for reasons of self esteem is still referred to as a "continent". This erosion was sometimes slowed, occasionally reversed for a time, but it was inexorable until 333 years ago today.
Islamists do not take these reversals lightly, particularly since this geographically tiny exception to their civilizations expansion turned out to be (for a time at least) annoyingly consequential to their efforts to fufill their faith's demand that they kill or convert...everyone. This date marked a profound slowing (for a time at least) of a thousand years of expansion and the halt, (for a time at least) of their expansion west. It is the date that, to their mind their civilization lost its way. 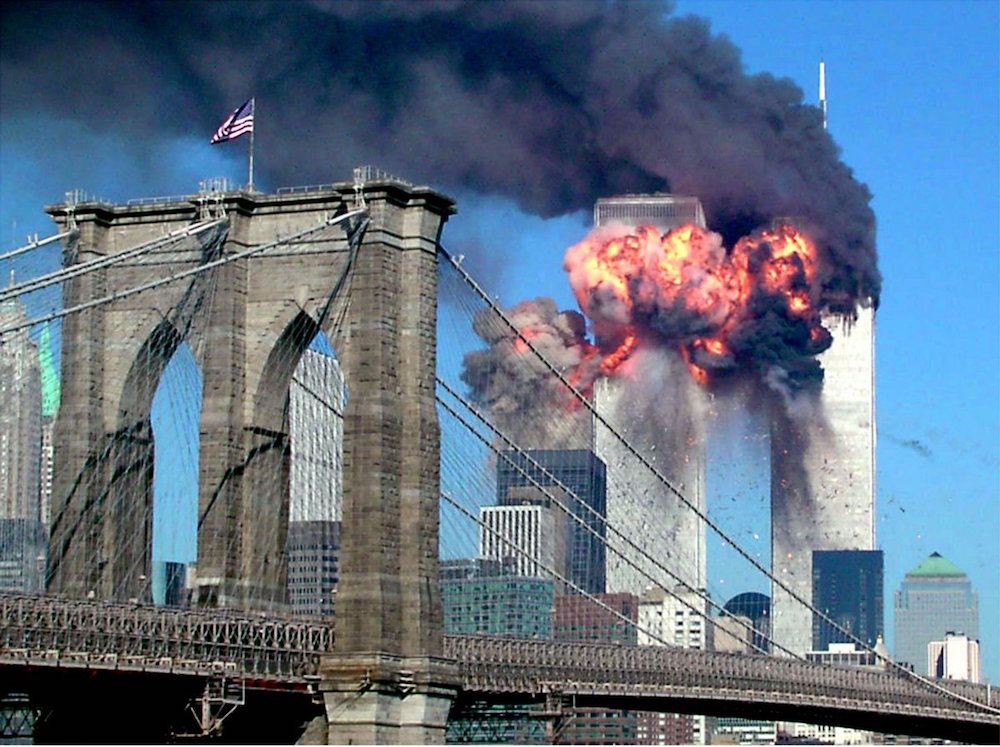 They, quite unlike our cultural trendsetters, have a keen sense of history, and so 15 years ago, this was the date was chosen to kill Westerners,. in remembrance of the day that, to these murderous fiends, the course of history went off the rails.
15 years on, nearly all of those who put together this celebration of butchery are dead, but their inspiration has worked better than one might have expected. The enemy of the west, and reason itself is again on the march. What it lacks in wealth, it makes up for in verve and they have lost none of the habits that Europe fought so hard and desperately against for a thousand years.
Stories of great evils; dark, malign forces, which threaten civilization itself and that, even if defeated, bide their time, perhaps for centuries awaiting a chance to crawl forth again thirsty for vengeance...these were once parables told by adults to their children to instill in them on a profound level that monsters are real and even when out of sight may still bide their time. Today, we are ruled by children who use such tales to reassure themselves that such things cannot possibly happen...even as the ancient enemy is inside the gates.
The greatest advantage that these people have is that they have long memories, and we tend to forget all that we have learned through the blood and terror of our ancestors.
So do not listen to those who would have you "move on". Remember it, for the atrocity that was inflicted on 3,000 of our own 15 years ago, was itself a memorial service performed by those who thirst for our blood, and who themselves never forget.