Important Update to the Akihabara Stabbing Post...Scroll Down 2 Updated With Actual Text: A Quick recap in light of the important corrections that I made to the previous post as well as additional information.

First, by the numbers
Death Toll is 7.
Injured 10.
This is a total number of 17 victims rather than the previously reported 14. I'm guessing that the 3 run over by the truck were initially omitted from the count as they were not stabbed.

Danny Choo has a very good, succinct post  on the incident that gives a timeline. It does appear from the news reports that the perp was stopped by a policeman drawing his weapon.
Danny links to this You Tube.

The perpetrator does seem to have gotten a remarkable distance, though at least one person tried to tackle him and was stabbed. Also, the bastard was reportedly an impressive athelete.

Japan Probe has an interesting article on the use of deadly force (or lack there of) by the Japanese police...

Which requires a note to my fellow members of  the 82nd chairborne division:

While this is certainly a situation where deadly force is authorized (this was the sort of scenario in which we were told in Maritime Law Enforcement School to "take the shot") This was Akihabara... on a Sunday. Any of my readers who have been there know that there was likely no clear shot presented to this officer. There are kids all around and the Cop has to hit a flailing, moving, crazy ass target at range with a .38 caliber revolver...this is a no win situation. According to the video he prepared to fire in the less populated alley. This is a call best left to the officer on the scene. Keep in mind that if he had missed and hit a bystander or the bullet had gone clean through and hit someone, the cop would be castigated by the same people who are upset he did not fire into a crowd.

Another, rather creepy bit of information via Danny Choo.

According to him, there have been 3 previous stabbing incidents this year similar to this one. In all four incidents, the perps, upon being apprehended, said..

"Anybody would have been fine."

This is worrisome, not just because of the utter sociopathic nihilism it indicates, but 4 murderers saying the exact same thing in such short order is just creepy. Is it a copycat spree, or something organized like one of those suicide chat rooms?

Meh this is just speculation but damn, that's odd.


One final thing... Those pics in the post below came from Japan Probe, which I gather from the .jpeg titles got them off of 2chan. These pictures are extremely important as they show something that the newscasts and newspapers (other than the Youtube linked above) do not.  People jumping to action before the paramedics arrived.

The mainstream English language coverage of this showed no such thing and it is an important thing that needs to be seen.

This is an awful thing, but these kids are alright... 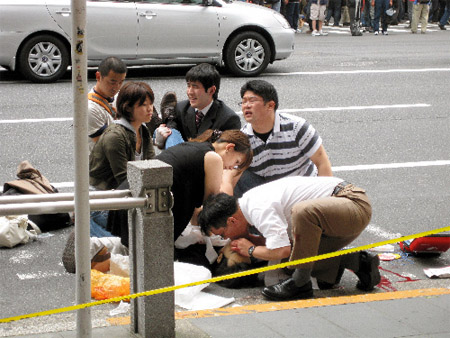 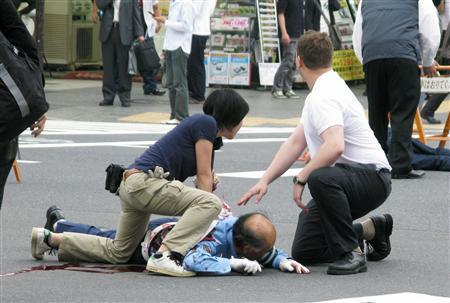 So Brickmuppeteers, give a big thanks to Japan Probe for posting these heart wrenching but important and informative pictures.