100 Years Ago Today
Woodrow Wilson had run his successful 1916 presidential campaign on the notion that he would keep the US from becoming involved in the unspeakable mess in Europe. 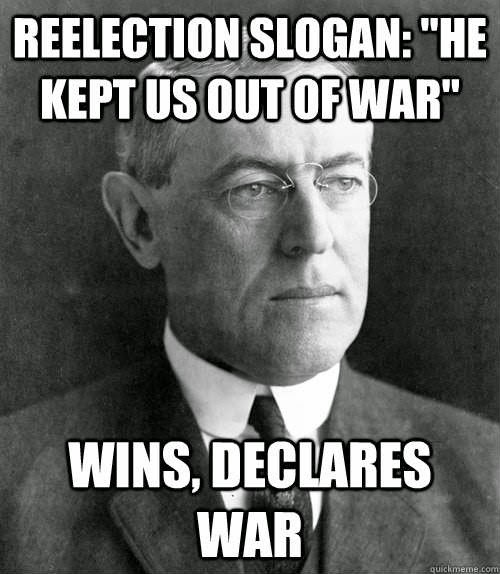 "He kept us out of war" might as well have been "If you like your peace you can keep it."

1 I just wish someone pointed me to some kind of proof that Sarin was delivered by a bomb. Not joking.

2 It's been fairly widely reported that Centcom assets tracked the bombers and there is no doubt that Syrian air force bombers hit the area where people were exposed, at the time reported.  It's also been widely reported that the observed cloud and area exposed are inconsistent with any dispersal method other than air drop, and that the story of "the rebels had a stockpile that the bombs hit" is not technically possible, Sarin would be degraded by such an event, and would not disperse over the size of the area effected.