Oh Canada!    Surprisingly bad news from Kanukistan.
Brickmuppeteers  have probably heard about how Mark Steyn has been brought up on charges by the Canadian Human Rights Commission for publishing a book critical of Islam.

Well, now Ezra Levant,  a Canadian journalist, has been brought before the same perniciously PC pinheads. His crime? He published the controversial Danish Mohammad cartoons.   Little Green Footballs has video. Here is an excerpt.

I must say the fellow comports himself quite well. The little Parsonette...not so much. Mark Steyn himself weighs in here and there is a good roundup by Steven Den Beste here.

This is terribly worrisome, but not nearly as worrisome as the fact the commission reportedly has a 100% conviction rate. 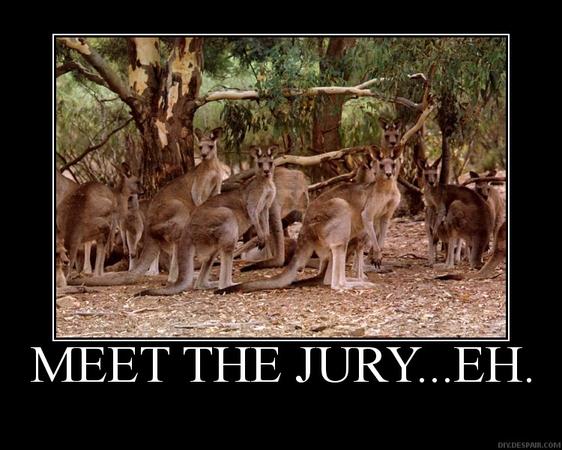 I didn't think Kangaroos were even FROM Canada.

As a practical matter, everyone called before the HRC's loses no matter what happens. The plaintiff doesn't have to spend any money; all the investigation and suchlike is paid for by the province. But the defendant has to pay all his own legal expenses. Irrespective of the decision, that can run to tens of thousands of dollars.

Which may be part of why the Muslim radicals like using it as a weapon against their opponents. Just by filing a form, they instantly cost their enemies huge amounts of money.