Massacre While the US News is focused like voyeuristic jackals on that idiot Sanford and like devout cultists on the Presidents speech, all hell has broken loose in Iran.

There are reports of government thugs going after the protesters with axes.

1 And now Michael Jackson has died. There won't be any room on the front page for news about Iran for days.

Tweaking Teh Twitters The Iranian government is searching for dissident twitterers. If you have an account, change your location and timezone to Tehran.

via Ace of Spades

Every little bit helps I suppose.


Then there is this via The Anchoress... 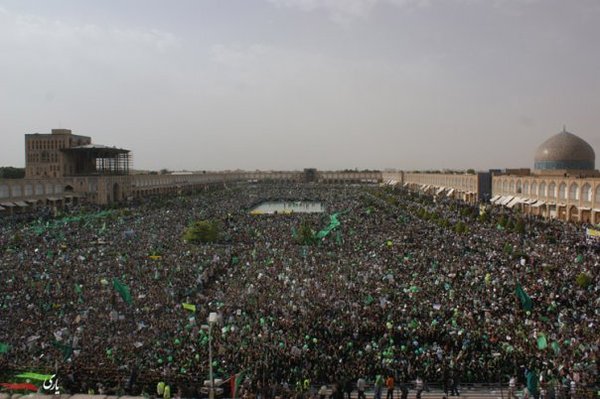 Godspeed...
UPDATE: Steven Den Beste has thoughts on how digital cameras and things like Twitter allow this and other similar pictures to be seen...

Now the cameras are digital, the smuggling is by satellite phone or internet, and publishing is on the web. In some cases the picture can be seen by thousands around the world within an hour of when it is taken.

...read the whole thing.
UPDATE 2: Again via The Anchoress

:::GO BACK DELETE ALL PAST TWEETS that may have Iran usernames . Arrests have been made. Please RT (Re-twee) ENSURE ALL SEE THIS::: :::GOOGLE EARTH DO NOT UPDATE THE MAPS â€“ it will allow govt to track protesters that are hiding on sidestreets and roofs::: :::Video: Perhaps the most intense Iâ€™ve seen to date. Wish I had more details behind it. http://ow.ly/eupm::: :::thank you for braving the consequences to tell the world about what is happening:::

The odds against these people are at least as long as those against the protesters in Tinanmen, and there is, of course little that those of us in the 82nd chairborne can do. But every little bit helps.

UPDATE 3: Michael Totten writes...
A friend who analyzes Iran for a living recommends a new Web site called Where is My Vote? as an indispensable source of information coming out of Iran. Everyone involved with it is Iranian. Some of the contributors are inside. According to my source, who knows his chops, itâ€™s accurate and up-to-date

Michael Totten is covering the unrest with constant updates as is Dan Riehl whose sources report that cell phones are off in the Capital and all tweets from the Islamic Republic have fallen silent.

UPDATE: At least partially Confirmed by AFP (Update: but see below)

The main mobile telephone network in Iran was cut in the capital Tehran Saturday evening while popular Internet websites Facebook and YouTube also appeared to be blocked, correspondents said.

Common Ground     There are all sorts of issues that reasonable people can disagree on. However, I think that most people from all political persuasions ought to be able to get together, sing kumbayah and agree on at least one thing.

Ed Whelan of National Review is a dick.

A lot of people blog with pseudonyms because they fear for their jobs or in some places their safety. Outing them because they "nipped at your heels" is damned low.

If Publius had been a commenter at some blog attacking Whelan personally, or spreading lies about him, or simply calling him names, I would not be very sympathetic. But the blogger - one of the few left of center bloggers I find reasonable and thoughtful - gave what most bloggers would consider a mild rebuke to Whelanâ€™s analysis and was outed for his trouble.

There's a post by the victim here who when confronted by Whelan via E-mail explained his situation and reasons for his pseudonym....to no avail.

I am short of time, and others more eloquent than I have expounded upon this...but this  quote that Instapundit puts up in his excellent link fest on this matter needs addressing.

Why should we feel sorry for him? If I was ever outed, I doubt that any liberals would raise their voices in my defense, except in a perfunctory â€œsay it now so they canâ€™t call me a hypocrite laterâ€ kind of way. And by then it would be too late. I would be outed and I would lose my job.

The same liberals who worked to get Prop 8 donors fired are now sobbing, sobbing, heartbroken, because this formerly-pseudonymous cyberbully is now on equal footing with the target of his bizarre obsession.

The same liberals who out closeted gays who have sex in private insist that they have a right to publicly harangue people with complete anonymity.

What's that Daryl?
Moonbat Lefties!?
Being Hypocritical thugs!?...in MY blogosphere!?
Golly willakers! Who'd have THUNK it?

Because the other side does it does not make it right. On the contrary, this is one of the most troubling trends of recent years reaching its ultimate expression in the card check elimination of the secret ballot. This is the sort of thing that principled conservatives tend to oppose...regardless of who it happens to.This is a bad thing because it was a bad thing to do. To put the shoe on the other foot. A conservative academic without tenure could lose his job over something like this. Publius was a Leftie but if he is at a university like Bob Jones  then he could conceivably be in much the same pickle that a Righty would be in at the vast majority of universities in this nation.

It gets worse, the idea that someone who claims to be a conservative feels that it is inappropriate for someone to post anonymous political commentary under the pseudonym Publius...

Hell, I'll just let that sink in there for a minute...

This was a common trick. It is also creepy, Orwellian and smacks of stalking. It deserves full condemnation. Mr. Whelan is not going to change any of his readers view of Publius one whit, but he has given all of us a very clear view of himself.

UPDATE: as Steven Den Beste points out in the comments, Whelan has apologized. The last two sentences of his post do get to the heart of the matter

...As I stated in that e-mail, I realize that, unfortunately, it is impossible for me to undo my ill-considered disclosure of his identity.  For that reason, I recognize that Publius may understandably regard my apology as inadequate.

1 Whelan apologized, for all the good that does.

2 A digression: I guess 'cause I'm paranoid, I always thought you could only slow down the discovery of your real identity with the use of a pseudonym. If anyone get's interested enough, you can be found. Am I wrong on this?