Use What you Have...Or Throw a Fit? Over at the Unofficial Coast Guard Blog, Peter Stinson is feeling played.

I am respectfully in disagreement.

Here is the deal. The Coast Guard bought a super whammodyne cutter some time ago. Named after the first Commandant of the Coast Guard, it is the largest vessel other than icebreakers the USCG has ever purchased.

It is bigger than a Perry Class frigate, has an innovative stern launch arrangement for its boats. It can conduct helicopter operations in Sea State 6. It brings together all the lessons learned from over 2 centuries of institutional expertise. It is ...on paper...a spectacular vessel. 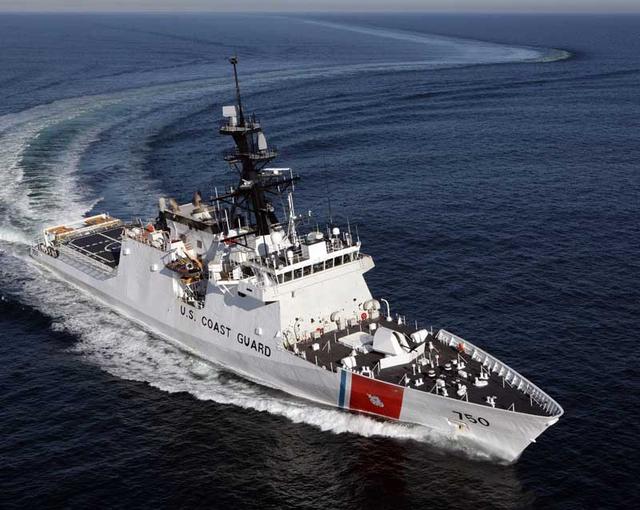 As you likely guessed from the mention of paper in that sentence...it also has, as they say..."issues".

There have been concerns raised about weather the vessel will meet its planned 30 year service life (It won't unless it gets a structural refit in the next 4-6 years). The vessel costs more than the entire defense budget of Ecuador, and its C4I system is not secure.

This last is possibly the most important and expensive. The communication, command, control, computing and intelligence system needs to be absolutely secure electronically. The Bertholf's leaks like a sieve.

Now the Coast Guard has certified the Cutter as seaworthy and allowed her to be commissioned. The ship passed her trial run and was given a clean bill of health by the Navy and Coast Guard.

They did this despite the fact that the C4I system is insecure and cannot be used for any encrypted messages.

This has some people up in arms, and while their upsettedness over the Bertholf is understandable (this thing has been a fiasco) I think that the anger over this particular bureaucratic maneuver is misplaced.

A few weeks ago Admiral Rosa came and talked to our unit about various Coast Guard issues, inspected the troops and took questions.

The Admiral said that the aviation component of the Deepwater Program was proceeding quite well but that there had been many expensive lessons learned on the maritime side.

We were told that the structural issues on Bertholf were rather overblown and would not affect seaworthiness or safety and that the C4I issue was in fact the big problem. The ship will commission though it will take a long time to get the C4I stuff TEMPEST certified. The vessel is still a useful asset and will be capable of doing Search And Rescue and other operations without TEMPEST standards being met.

(TEMPEST is a set of standards for military communications and that is all we will say on that.)

This is jives pretty well with the facts as we know them.....no real sinister cover up going on regards this. Its the most obvious solution to the problem. It is heads and shoulders over David Axe's proposal.

If the Coast Guard were truly responsible stewards of the taxpayer’s money, the service would have rejected the ship, returned it to builder Northrop and electronics maker Lockheed, and demanded a refund.

While his idea has appeal on a visceral level, the cathartic payoff of such a drama queen temper tantrum does not compensate for the loss of a still useful ship at a time the USCG's assets are stretched thin and at the end of their operational lives.

Despite the expense and gravity of the procurement debacle, I see no reason to get the vapors over this particular decision. Getting the ship certified for sea duty sans its full C4I suite was, IMHO, the correct thing to do. I assume the ship can even operate with bolt on encrypted radios from, say,  the Army if it comes down to it.

Having a 500 million dollar "Building 750" sitting as a humiliation to the Coast Guard does not save any mariners in distress nor leverage any good out of this situation.

Now lots of people are anxious to see the heads of Admirals roll over this debacle. This is understandable. However, it now seems that most, if not all of the wrongdoing was on the civilian side, in particular a civilian who signed a document waiving the security standards for the contract....which he was not authorized to do, but is a get out of jail free card for the contractor.

The Coast Guard has not had much experience in procurement for the simple reason that we haven't been able to buy a lot. The only recent experience was with the 87's, the buoy tenders and the Healy. All went (er...relatively) smoothly as I understand it in part because the shipyards in question were small, civilian and generally ethically run....certainly in comparison with those who make money off the byzantine DOD procurement system.

The officers who took this job certainly did not cover themselves in glory, but it is unclear that they were incompetent or negligent as opposed to simply being inexperienced and unsupported in these matters. The contractor in question successfully butt-raped the Navy with regards to the LPD 17. Keep in mind that the USN has far more experience in dealing with defense contractors.

In the military, discipline and professional development is not about vengeance, it is about correcting mistakes and preventing their repetition.

Throwing senior officers overboard because they got set up for failure might give David Axe a woody, but it is not good leadership. To the extent that the Commandant is standing by and protecting his officers, many of whom have had long and honorable careers in the service of their country, he is doing exactly what good chiefs do for their enlisted people every day.

The priority now is to learn what went wrong, apply those lessons, see that this doesn't happen again and get the ship and her sister operational.

If there WAS wrongdoing on the part of any USCG officers then there is always a dark place in Leavenworth, but I think the Commandant is doing the proper thing trying to fix the problem rather than hunt for scapegoats.

I'm a third class enlisted and these issues are waaay above my paygrade, but the whole thing at this point seems to be beating a dead horse.

The ship has defective, insecure coms, and I would expect that the repair of the C4I system is going to be along the lines of George Washington's Axe.

However, it is not unseaworthy, it is new, big and capable of doing many things but is of limited use at a pier.

The USCG certified the ship as commissioned so they can use an imperfect asset to save lives and such. In order to do so they used "Yeoman-fu" to bend the pencil so they could ignore the broken radios and yet still accept the ship.

This seems like a reasonable response to a bad situation.

Of all the mistakes and screw ups that have occurred with the construction of this vessel, this pragmatic decision seems to be the last thing one would get upset about.