Master of None To be sure...but a Jack of All Trades is Damned Useful. Over at Information Dissemination. Galhran and others have been talking about the dwindling numbers of ships in the USN and in particular escorts as well as the need to wage wars "of all temperatures". Galhran is particularly fond of mother ship concepts.

With regards to a general war, the USN NEEDS anti-submarine and and anti mine forces.Such missions and peacetime showing the flag missions, also require a fair number of ships.

One of the most effective ASW   aside from a hunter killer submarine is the helicopter, which is a good minesweeping tool as well.

Escorts to carry helicopters such as the Perrys' are being decommissioned faster than they are replaced and the Littoral Combat Ship is far too expensive to buy in bulk.

The LCS is in some ways too big for close inshore operations, and it is too small to act as a mother ship for a large number of manned and unmanned vehicles. Both versions use experimental hulls that push computer design capacities to the limit, with possibly unfortunate results and are weight sensitive in regards to their design speed....which seems inexplicably high.

First a bit of review...

The US and UK determined in the '50s and '60s that helicopters were disruptive to more conventional flight operations, I assume that this is still the case. I also assume STOVL aircraft with their takeoff runs are only marginally less affected by this. The original UK solution, if I understand it, was to put the helicopter assets on an escorting light carrier (dubbed a cruiser).

These designs had varying degrees of armament but most IIRC had through decks as this maximizes helicopter landing spots for surge operations. As it was, the CVA01 was canceled and the only aviation asset that could be salvaged was the cruiser which was saved in part by its designation. To maximize its aviation capability and save money in an ever shrinking budget, most of the multipurpose capability aside from commando carrying was sacrificed. This was HMS Invincible.

The USNs answer to the same issue was to have scads of escorts operating one or two helicopters so that a carrier (or a convoy) would be accompanied by 15-20 helicopters robustly dispersed in ones and twos amongst the escorts. This made sense when we could afford ~10 escorts per CV or convoy,but on a ton for ton and likely expense basis the helicopter cruiser might be more economical.

Steel is cheap in comparison to the electronics system of a warship. The size of a vessel does not dictate its affordability, systems do.

This vessel needs an air defence capability beyond that offered by RAM, but it does not need an air defence system in the same class as an all-up Aegis system. Something like NTU firing fire and forget missiles (such as the mooted ESSM

with the AMRAAM seeker) would give it a decent defence capability. The commercial, very austere, Aegis system like that used on the Norweigian Aegis Frigates might be a good way to leverage existing training and spares.


If a through deck is not utilized then JDS Haruna or the Danish Absalon would be close to what we're looking for. Note that Absalon costs between one half to one third what the LCS does without its canceled weapons kits.

This brings up the question regards weather or not to use a through deck. This would give the following nontrivial advantages :

3-4 extra spots to get helicopters in the air quickly for mass rescue, troop landing or whatever.Even airflow over the deck, uninterrupted by a centerline superstructure. This is important as it affects landing safety far more than is appreciated and while not nearly as crucial for helicopters as fixed wing planes it is still a concern.The ability to land amidships at the point of minimum pitching allows helicopter operations in far worse weather than a stern landing pad. Small fixed wing UAV's can use it like an old fashioned carrier, and possibly even small coin airplanes in a pinch if the government ever deigns to buy them for close air support.
On the debit side, a flight deck is...well.. a flight deck, and to uninformed or malevolent congresscritters looking to knick money for their idiotic Ponzi schemes it is a "carrier" and there will be a temptation to use it as a replacement for a CV which it certainly is not.

That concern aside, the versatility of the through deck is pretty compelling. It just needs to be made clear that this is not really a carrier, but a general purpose vessel.

One further thing that should be considered would be utterly without merit on an actual carrier.  On a general purpose ship an effective gun is generally desirable.

Guns are fairly economical in both expense and volume. Ideally, for littoral warfare, fire support guns should be on a small inshore vessel, a monitor of sorts, like the UK and Italians used in WW1,  but this is unlikely to be afforded.Its also possible that "netfires" from small craft perhaps even drones will replace tube artillery for fire support, but I doubt it.

So stick a 127-155mm gun on our escort. Assuming its main gun is fairly economical like the UKs' 155mm project and not a gold plated tube to shoot money out of (like our AGS) the gun should be an economical fit. There are issues with blast and interference with other ship functions, but helicopter ops can be kept well away from the gun during firing.

A carrier with a gun is certainly anachronistic but...again...this is not a carrier. It's a gunboat with helicopters...an aviso perhaps.

This leaves us with something akin to the Japanese Osumi or this off the shelf design from HDW. Osumi has one disadvantage, she cannot land helicopters amidships due to blade clearance issues, but is otherwise very interesting.    She has 2 and potential for 3 landing spots, a big hangar and a well deck that can accomodate 2 LCACs, yet at 8,900 tons she is smaller than a DDG 51 and far cheaper than an LCS. 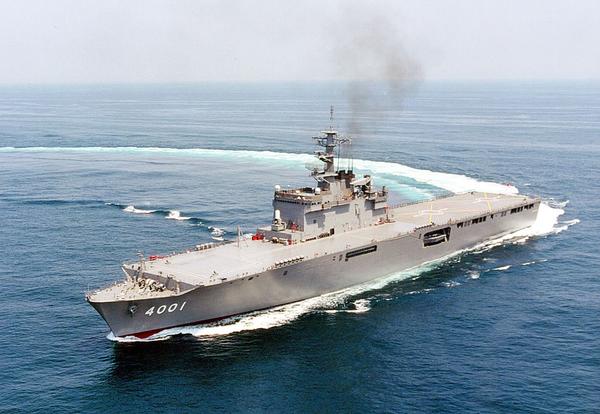 This ship was reportedly based on the smaller Italian San Giorgio, which boasts a 76mm gun, a well deck and an LST style bow ramp(!?) 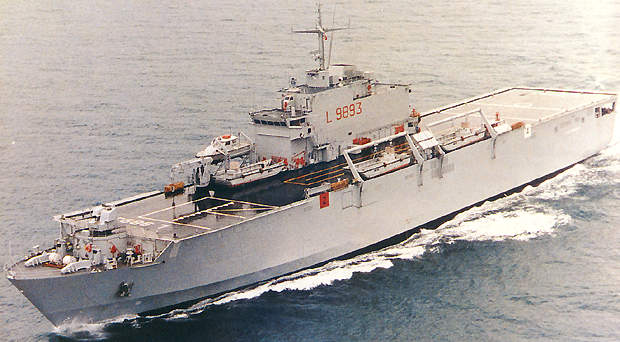 A large fairly austere hull is inherently versatile. Troop carrying, the ability to act as mothership or tender for small craft like the CB90's or perhaps FACs, or loaned Coast Guard patrol boats looking for pesky pirates are all possibilities. ISO containers for disaster relief or just greatly expanded medical facilities would greatly facilitate the sort of "soft power" operations that are so important in "peacetime". In a hot war provision for a big VDS fish and ASW helicopters would give the sort of ASW capability that everybody except the Japanese seems to be either ignoring or selling to Chile.

Regardless of configuration, such a project would need absolutely ruthless oversight to keep people from adding whistles and bells and pricing it out of reach.

With every shipbuilding project going through the roof  what references do we have for how cheap should it realistically be?

Well, at the high end, note that the above linked HDW design (which, is by far the largest of the three linked) is 15,000 tons, which is less than 4 times the size of a USN FFG 7. This vessel only needs one AAW system (though more modern obviously).
Aviation maintenance facilities carry a certain price tag associated with them but if built at least partially to commercial specs such a vessel could be fairly cheap. Additionally, 4 FFG7s already require 8 helicopters, so, given the fact that larger ships are more economical per ton, it is not unreasonable to assume that costs might be within the ballpark of 3-5 FFG7's...or 1- 1.5 LCS's... for a far more versatile ship that could act as an escort carrier in a major war. That is for the big one, though given the need for a fire control system and weapons the costs do not scale down linearly with size.

Nevertheless, this could be an economical and versatile solution indeed.

* image of UK escort cruiser proposal is from Richard Beedal's superb Navy Matters site, which is about the best place on the web for info regards the UK Royal Navy.

You talk about helicopter carrying in this but didn't mention any of the "gator navy". An LHD carries 23 choppers plus 6 Harriers. Usually as embarked most of the choppers are intended for amphib operations, but they don't have to be.

All the smaller gators also carry helicopters. Counting the lot that's more than 40 ships IIRC, and in a real shooting war most CBGs will be accompanied by gators.

Yes, but the current US amphibs are seriously expensive. Although the LHA's LHD's would almost certainly see work as escort carriers, they are amphibious ships, and each amphib has a speciffic job to fill in a 'phibron...one they cannot do if they are on deteached duty.

Leveraging these assets for other uses from time to time is not unwise, certainly the USN is doing that now off Somalia, but we need general purpose escorts too.

This way above the paygrade rant is aimed at an alternative to the LCS.

Thats why I'm looking speciffically at off the shelf designs, to keep costs down and numbers up. Helicopter capabilities can only compensate for limited numbers to a very small extent. A ship still has to be present to be effective.

I see the hypothetyical ship here filling a similar niche to the Flower class vessels of WW1. Ubiquitous support ships with an escort capability.