Navies, Coast Guards, Pirates and Priorities Continuing and elaborating on the thoughts in this earlier post which was banged out under considerable time pressure....

Modern piracy  is a far more serious issue than is generally thought.

Eagle One is once again discussing this. He has a typically thoughtful post over at Milblogs regards this issue, focusing this time on the current  situation and the captured Danish crew. Read the whole thing is is very well thought out by a guy who was a naval officer longer than I have had whiskers....

...which gives me some pause in mentioning my very minor quibble with this excerpt:

My arguments regarding international law (of which I generally hold a very jaundiced view) and what I suspect are the ROE governing ops off Somalia are not that the rules are right, but rather that if you know you are going "hunting pirates" that the skids should be greased for "hot pursuit" well before you find yourself facing a captured merchant ship with hostages. Lay the diplomatic foundation first or announce ahead of time that which you suggest - that due to Somalia's inability to control its own waters, others will step in as needed. I can see no reason why such a decision should be left a CO to make on the spot. Although, if it was- then I think in this case the CO of Carter Hall made the right call.

Actually, regards piracy (and slavery), the wheels are greased. While "Hot pursuit" is a delicate matter in some instances, as laws are not uniform, slavery and piracy are universally recognized crimes under international law. Pirates and slavers can be (and occasionally are) pursued across borders. Even the UN, with its dubious record, has these two crimes listed in its charter.

His larger point regards planning ahead and getting ROE settled is, of course, quite correct. Additionally, it should be remembered  that "hot pursuit" means that you are pursuing someone and maintaining contact with them....chasing a ship into another nations waters for instance.


The collapse of the European empires, (which for their many faults had made piracy largely a thing of the past) the increase in gun control initiatives worldwide and the whittling down of the surface forces of the nations that traditionally fought pirates, (most notably the UK) have combined to make vast areas of the oceans a Hobbsian mess.

The increase in piracy is not limited to Africa where in many ways it is a part of the larger war, but is also prevalent anywhere there is a breakdown in governance, the Malacca straits are another area of international concern.

Eagle1 lists the total number of cruisers, destroyers, frigates and patrol boats in the USN inventory, and comes up with.....86..... a rather small number that represents a big problem.

Numbers count and as the expense of  individual units goes up, the numbers affordable go down.

The Aegis ships can control vast stretches of ocean and are superb escorts for the carriers. With Tomahawk missiles they are powerful strike ships in their own right, but for convoy operations and law enforcement inspections  and boardings...which is what antipiracy duty entails, NUMBERS are needed.

The ships have to be present to achieve anything, and 30 or so ships available at any one time (given yard time, and work up) is way too few.

There are other related problems.....the Arleigh Burke class are perfectly capable of dealing with pirates, but to do so is to use a platinum plated sledge hammer to swat a fly. It is not sustainable in the long run to use 800 million dollar ships to deal with men in dhows armed with bazookas....or sharp pointy sticks (though it can lead to grim, 'Darwin Award' moments of humor).

Additionally, putting warships optimized for high intensity warfare into a low intensity one is not playing to the ships strengths and can make them vulnerable to asymmetric attacks ala' the Cole.

Boardings and inspections could easily put a cruiser or destroyer within the normally limited kill zone of a terrorist vessel armed with explosives or perhaps a torpedo. This would be a tempting target for Al-Quaeda or a similar organization.  Given the high percentage of the current crop of Pirates that are Moslems, the potential for this sort of asymmetric attack on the high seas is very real.

Of course, his holds true for a small patrol vessel too....but in the unfortunate event we utterly loose a patrol vessel like the successful "Storm" class of the Coast Guard and Navy, we loose 35 men and a <25 million dollar asset. Total loss of an Arleigh Burke means an 800 million dollar ship and 380 sailors.

We need something cheap shallow draft and fast with the armament of a Coast Guard cutter that can go into the littorals  and  engage the enemy....back in the day this would have been called a 5th rate, a gunboat, or perhaps a sloop, aviso or, in the late 20th century, a frigate. Today,  power point paladins would probably call it something really gay like "Littoral  Combat Ship"...oh wait. 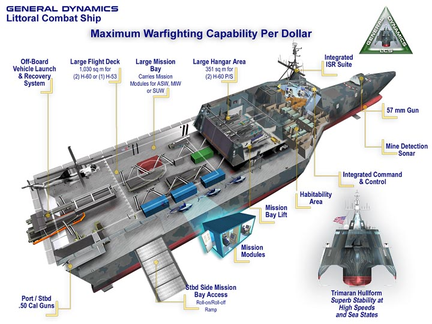 The LCS is about the size of a  Frigate, and seems to cost upwards of 200 million. One of the two competing designs was recently canceled because of cost overruns. Despite this, its basic armament suite is comparable to a US Coast Guard cutter.

On the bonus side,  it can be fitted with several systems in a bolt on fashion...most modern ships can.  It is really fast,  the trimaran design (the one that hasn't been canceled yet) has very impressive helicopter facilities and good seakeeping, its huge flex-deck and generally versatile design make it an  interesting interesting and inspired choice for the USN as a replacement for the old Perry Class frigates. In particular it has potential as an ASW platform...something the Navy really needs. This vessel can fulfill a number of second line roles traditionally filled by destroyers and frigates....but as pirate hunting gunboat...it just doesn't seem economical.

You don't need sophisticated custom designed and manufactured stealthy fixtures...you can have the vessel built to commercial specs...perhaps with icebreaker scale scantlings and shell plating for toughness. You need a very seaworthy ship capable of 25-30 kts....more if you can get it, a boarding party or two, one or 2 boarding/inspection launches , a good towing capacity, and possibly, (if you're feeling particularly decadent) a small helicopter deck.

Fighting Piracy doesn't require ECM, area defense missiles, rafting and silencing of the engines, sophisticated data processing or 50 knot speed all of which are expensive. It doesn't require anything more powerful than a 57mm gun and it could likely get by with a much smaller one.

There is just one problem. In a major war all of those things are vitally necessary(OK...nothing actually requires a 50 kt speed.)

In even a fight with a 3rd rate power, let alone China or Russia, such vessels would die a quick death. For frontline units these expensive items don't just need to be bought, they require training, both for maintenance and proper use. Sonarmen in particular are specialists who's skillset is as much art as science, you can't let this atrophy.

There are other issues...we have few people with naval experience in congress, and many who are looking for any excuse to cut military funding. If we bought, say 35 of the aforementioned "Cyclone/Storm" class patrol boats there are quite a few congresscritters who would count them as full-fledged combatant hulls, either through ignorance or malice. The navy needs more vessels, but they must be capable vessels. It has to escort the carriers, and in a general war provide convoy escorts...it needs those LCS type ships, and it needs something akin to todays Aegis ships...the last thing it needs is to have a bunch of patrol craft counted as frigates on the navy list.


Additionally, the skillset for antipiracy is vastly removed from that of a full on war.It is a paramilitary matter, it involves lots of boardings inspections, getting very close to a potential enemy...a no-no in a war. For example... 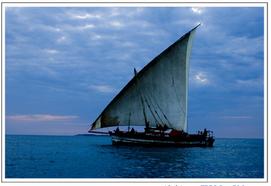 One of these  vessels is innocently going about its biddness, (fishing or hauling copra or whatever)...one is full of murderous Arab pirates who are looking to prey on innocents and one is transporting black African slaves to Arabia....note the differences and identify them...answer below the fold.*

Frontline navies can do this for targets of opportunity,but it is uneconomical.

This is a job for the Coast Guard. 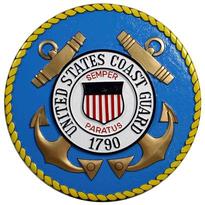 The Coast Guards of the US, Japan, India, Italy and a few other nations are trained for just this sort of thing. Because they do search and rescue and disaster relief as well, they are well trained for the hearts and minds operations that this long war requires.

SinceWW2 the Coast Guard has had a requirement for about 100 patrol boats...they have not met that goal since the late 80s and the current fleet is both small and quite long in the tooth.

I've blogged on the small cutter woes before.

Give the Coast Guard 60-100 patrol boats as opposed to the 41 we have now, and an additional tender or 2. This would enable 10 or more patrol boats to be in piratical hotspots and still have enough to do domestic duties with some leeway for surge ops and attrition (indeed we have six 110' cutters in the Persian Gulf now....hunting, amongst other things, pirates)

In a few years, we can...especially if we coordinate with the other competent Coast Guards and smaller navies...take care of this issue.

Given the cutters, the Coast Guard can do so without the navy having to train crews to use ships useless in a full on  war...ships that will tempt congresscritters to commit further whittling away on the navy.

It's a trick question:


The first one is carrying refugees desperate for medical attention.

The third is an AlQuaeda vessel manned by suicide bombers with 6000 pounds of torpex in the hold.

..but then you knew that didn't you?