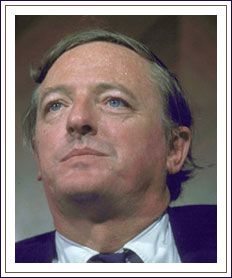 Few people have made as much difference as he did and fewer still have made it peacefully, intellectually and for the cause of liberty.

When Buckley founded National Review, conservatives, and what would now be called libertarians were utterly in the wilderness. The notion of any meaningful restriction on the role and function of government, indeed the very concept of the US as a Republic was a minority view....almost a fringe one.

Through sheer determination, and his considerable skills as a debater and writer, Buckley used his little intellectual magazine the way the founders of this republic used their pamphlets, to spread ideas about liberty, the threats to the nation and what role government should actually have. These were arguments that the left had effectively all but silenced for quite a while, and for some years, Buckley was a lone voice echoing in the wilderness...

He was however, a quite erudite voice and he caught peoples attention with his impressive knowledge, wit and idiosyncratic mannerisms.

Buckley helped to bring about a sea change in American politics. He helped to show  that a conservative interpretation of the US constitution, did not mean being a political ostrich.Through sheer intellectual excellence he  jump started a movement. He famously joked that  a conservative intellectual was required to 'stand athwart history, yelling stop'. This was occasionally used to malign him as an unthinking reactionary, but, in fact, was likely a reference to the "progressive" view of history inexorably leading to more and more centralization and ultimately "utopia" a very dark place which has little place for individualism.

Buckley was certainly not unthinking nor was he hide bound. He did change his views over time particularly with regards to civil rights and always on the side of greater freedom. Ultimately, he straddled the dividing lines between conservative and libertarian philosophies and tended to come down, particularly in later years more often than not on the side of liberty (he came to be convinced that drug legalization was the best course for instance) .