Born in 1921, he was one of 7 children.  He survived a bout of whooping cough in his early years. By the time he was 10 the nation was in the throes of the Great Depression and he frequently missed school doing odd jobs to help feed his parents and 7 siblings.

When the US finally became involved in World War 2, he enlisted in the Navy. After serving in various capacities in the battle of the Atlantic, he volunteered for a spot on an underwater demolition team. Despite their name, their concept of operations at the time involved rather little swimming. Rather, they planned to use rubber rafts to approach obstacles and plant their explosives, swimming only a fairly short distance and freediving. It was hoped that darkness and surprise would cover them. 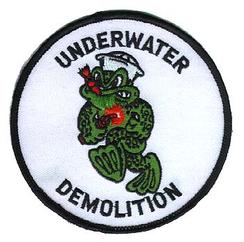 On June 6 1944 the folly of this became clear.Uncle John's unit was tasked

with clearing obstructions on what would be known to history as "Easy Red" sector of Omaha Beach.

On approach their raft bottomed out, forcing them to swim nearly half a mile under the tender ministrations of Rommel's crack machine gunners. The swimmers on ether side of  took rounds in their satchel charges, detonating them and blasting his shipmates to the four winds.

Uncle John found himself unable to contact anyone else in his squad but swam through a hellish fusillade of enemy fire to plant his charges. After that, he waded ashore with the first wave and, dodging machine gun fire, pulled several wounded allied soldiers and sailors from the blood red surf. He grabbed a rifle from a fallen soldier and, despite having next to no infantry training, moved inland off the beach.

Due to the fact that his insignia (and wetsuit) had been lost when his shipmates exploded, he entered battle wearing swim trunks, a scavenged rifle and an ammo belt. As he had no way to prove that he was navy, he was pressed into Army service wearing a dead mans uniform and served along with other members of his unit in France as an infantryman for several weeks before he was returned to what was left of his unit. Of 175 UDT swimmers engaged at Normandy, 91 were casualties, including all but one of the other members of John Talton's squad.

After the war, he went to college and became a mechanical engineer. He worked at the Radford Arsenal and for Hercules Engineering where he worked on rockets and missiles. He was involved in several NASA projects involving solid rockets, particularly trans-stages, and assisted in the development of the Nike-Ajax and Nike-Hercules AAA missiles. He was also instrumental in the development the innovative solid rocket motor for the ridiculously fast accelerating Sprint point defence ABM.

He did charitable works through the Masons and Kiwannis International for 50 years as well as his church.

He can be seen interviewed at length in Peter Jennings 50th anniversary D-Day special and in the History Channel's  Suicide Missions of D Day .

Update: Fixed link. Corrected text. (John Talton did not serve in the Pacific. His brother, my great uncle Doug, served as a Landing Craft Coxwain after commanding a landing craft at Normandy.)

1 ...and as I said when you told me his story via AIM a few days ago, "He also had a harem of supermodels."  I neglected to mention that he also invented Monaco and salt water.

An incredible story, and my heartfelt condolences for your loss.