Hanjin Ships Allowed to Offload (in U.S. Ports at Least) About two weeks ago Hanjin Lines, Korea's largest shipping company, filed for bankruptcy protections. This has worrying implications for the shipping industry in general, but the story escalated quickly.
Ports subsequently blocked Hanjin vessels from docking out of fear that they would not be paid docking fees. This stranded the crews on ships with dwindling supplies of food and fuel. This was partially mitigated last week, when a court ruling enabled certain U.S. ports to allow Hanjin ships already en route to tie up and offload. However, There are still issues...

Creditors have sought an arrest warrant against the Seaspan Efficiency, a ship hauling cargo for Hanjin that was due to arrive in Savannah. Wang said the cargo concerned amounted to just around $800,000 and that he was confident the parties involved could come to an agreement.

Additionally, things are not being resolved so smoothly elsewhere in the world where numerous vessels  are still stranded at sea with dwindling supplies. Lloyd's List has an interactive map. 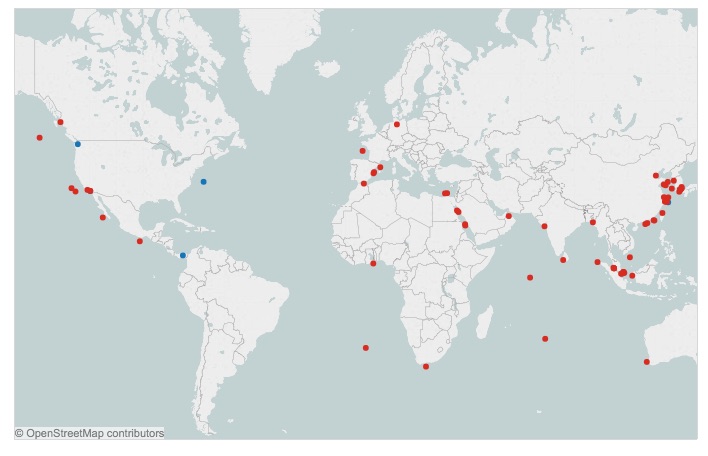 Screengrabbed from Lloyd's Sept 13, 15:46
This is, as one might expect, playing havoc with the global supply chain.

"The fallout of Hanjin Shipping is like Lehman Brothers to the financial markets,” Wang said. "It’s a huge, huge nuclear bomb. It shakes up the supply chain, the cornerstone of globalization.”

This will also likely cause an increase in shipping costs going into the Christmas season.
Note though, that the Baltic Dry Index, has recovered from its alarming  slump earlier in the year, so, leading indicators are, at least mixed (unless you're in Australia...Then you're doomed apparently.)

1 There was a woman who got a fellowship to spend a year on a cargo ship writing poetry or something. Turns out she's on one of the Hanjin freighters and is stuck there.