Joplin Before and After 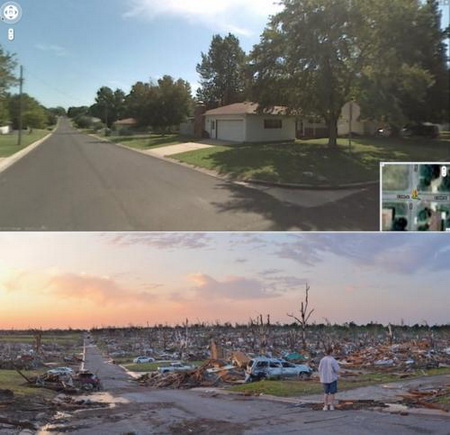 
124 confirmed dead and over 1500 still missing in Joplin alone.
128 deaths are reported in Alabama.
Another batch of line squalls is clobbering the heartland as I type this and tornadoes are reported in Oklahoma City and one just made an appearance in downtown Dallas TX.


It's been a bad day. and it's going to be a very long night.

Our server is in Dallas, so I'm guessing they didn't get hit quite as bad.  But that's one hell of a storm system.

Got Him! (updated) According to the BBC.
Osama Bin Laden is dead.
AND WE HAVE THE BODY!

President Obama is to give a speech shortly.

Time for a victory dance!

UPDATE:
Shot in the head?!
Via Hot Air's Bin Laden is Dead!1! page


Good Speech Mr. President!
Amazing. They conducted a ground raid on him and lost no Americans.
More Updates:
Hot Air has this tidbit:

Update (AP): Amazing. This Pakistani IT consultant lives in Abbottabad and ended up tweeting about strange goings-on this morning without knowing the significance, of course. A few choice tweets:

Helicopter hovering above Abbottabad at 1AM (is a rare event).

A huge window shaking bang here in Abbottabad Cantt. I hope its not the start of something nasty :-S

Stratfor comments.
Bush reacts. Looks like Obama called him, which was a very classy move.
Scott Lowther has a sublime commentary here.
Ace has thoughts here and here.

I'm not questioning the timing. I'm not worried if it gives Obama a bump in the polls. I'm fucking going to pop some champagne and drink a toast to the military and the memories of those who died on 9/11 and in the War on Terror that followed. I'll add in George W. Bush and yes, the President of the United States of America.

Indeed!
This is awesome... I think we can all come together and agree tha......oh dammit!.

â€œWhen do we get to see the long form death certificate?â€

Additional Updates Below The Fold.
more...

The Latest Offerings From Vault Tech...and Better Options Cleaning out my tabs I blundered into this story from the Daily Mail concerning Vivos, a company whose stated* business plan is remarkably similar to that of the fictional Vault Tech.

The 137,000sq ft bunker - designed to house 950 people for a year and withstand a 50 megaton blast - is currently being built under the grasslands of Nebraska. 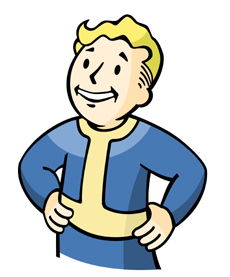 But do they have the spiffy suits?

The plan has a few problems...like the need for sufficient warning and working transportation to get to Nebraska in the event of a catastrophe. (This is, of course, not as big an issue for Nebraskans).  Checking tickets at the door would be...a tense affair to say the least.

This sort of shelter would seem more useful in an urban or a suburban setting, but buying space and getting it in a crisis would seem problematic both practically and ethically unless it were a feature of a subdivision or condo complex. If I were in the market for a survival shelter, I'd go one of the many home shelters I've seen on the market, like these.

Now the sort of large shelter Vivos is talking about, though with far fewer posh amenities, would make actually sense as part of a rational civil defense plan (which we don't have).

Indeed there were plans to dovetail the construction of the interstate highway system with a vast associated system of austere publicly accessible shelters to provide some protection from tornadoes or a N.B.C. attack, the sorts of things that one might not have time to evacuate for. There is a good overview of one of the few (short-lived) fruits of that program here. 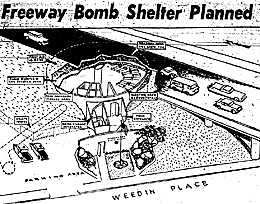 Civil Defense was originally a federally funded and directed, but locally run enterprise that, despite its inefficiencies, made maximal use of local expertise. Retired millitary and volunteer personel who lived in and knew their assigned areas were to provide some degree of holistic redundancy to a system that would always be far from perfect but had the potential to save many lives in the event of a calamity.

Of course it was not to be. In keeping with their overall policy of being well intentioned, wrong headed and self destructive, the progressives, in the interest of mutually assured destruction, peace in our time and a quick merciful death hamstrung the CivDef program in the US, until it was given to the newly formed FEMA by Jimmy Carter. FEMA removed a lot (nearly all) of the local input and,  in any event seems to have been designed for maximum inefficiency. Building codes, fallout shelters in cities, and any serious planning for what to do in the event of even a minor nuclear attack or accident were pretty much pushed to the wayside. Instead we got a lot of jobs for beauraucrats and an infrastructure that was completely top down and ill suited to its job.

Meanwhile the USSR gleefully mocked our lack of preparedness and continued to build shelters. They had fallout shelters for more than 11% of their population when the Berlin Wall fell.

The hipster left loves to make fun of the corny Duck and Cover videos from the '50s. However, it is now clear that those were correct both scientifically and ethically. They were developed based on close work with the Japanese government assessing the injuries at Hiroshima and Nagasaki, which had actually been much higher than anticipated, and the lessons of nuclear tests in close proximity to US troops where the dangers of radiation were finally appreciated. It was discovered that "duck and cover " would have saved many lives as would sheltering in place for a few hours.

Jerry Pournelle has thoughts here from a 2005 series of observations on the Katrina debacle.
An excerpt:

...My own view is that restoring the old Office of Civil Defense, with local organizations of both volunteers and professionals, with emergency militia powers and responsibilities at the discretion of the governor, makes a very great deal more sense; but it will take a long time to build a proper organization. We have the technology. We can do it.

What we must end is the attitude that you can only trust professionals hired and paid for. Bureaucracy is the answer to many problems, like dog catching and enforcement of needful regulations. Bureaucracy is almost NEVER the proper response to emergencies and unforeseen situations...

Shelters can get expensive and in any event are often completely impractical here in the swampy coastal Southeast, however a reinforced safe room is a good investment against tornadoes. In the event of a radiological incident, sheltering in place, which was so soundly mocked when Tom Ridge pointed out its efficacy is actually quite effective according to the current administration.

Glenn Reynolds of Instapundit fame wrote this article in The Atlantic on how the Obama Administration is ( to it's credit) grappling with a reality the left does not want to look square in the face.  It inspired a lot of responses on Reynolds normally comment free blog in an uncharacteristically long post on this topic some time ago. Do read it all.

On a more mundane level it bears remembering that catastrophes are usually not atomic and as we are constantly reminded by events are not in any way rare. Having food and water for 2 weeks or more is not difficult (the water is an issue but if one keeps jugs handy 1 gallon jugs can be filled when trouble is anticipated~70 for a family of 5  for 2 weeks) and in any event is likely a better investment than a bolt hole in Nebraska.

* Lets hope that they don't have an unstated plan like Vault Tech did...and that they have enough water chips.

1 I'm not signing up unless I get a free Pip-Boy.