The Underreported Aftermath of Ike As we happily reported here, Ubu Roi survived hurricane Ike unscathed.
However, many did not.  Over at Houblog he points out that literally hundreds are still missing.

The most disturbing bit is this piece by a commenter,

This is third hand but I am told of a coast guard member that is saying that they are pulling bodies out of the bay on a daily basis and is suprised that it is not being reported in the media. I am also being told that many people on the Bolivar peninsula were overtaken by events. That Thursday evening many people got home form work and started packing up to leave Friday morning, but TXDOT stopped the ferry early Friday morning and that within an hour or so of the ferry stopping, the road through High Island flooded from the storm surge in seargent leaving them no way off the peninsula. I too am questioning the official body count.

Ubu says that that report about the citizens of Gilchrist and the rest of the barrier islands is supported by other reports. If true there could be HUNDREDS dead. Reportedly very few bodies have been found. Now, there are the usual conspiracy stories about corpses being stacked and a conspiracy by the media to cover it up of course it is more likely, that they are buried in debris, the marshes, the sound or were washed into the gulf. There were very few survivors from the Bolivar peninsula, some idea why can be seen here. 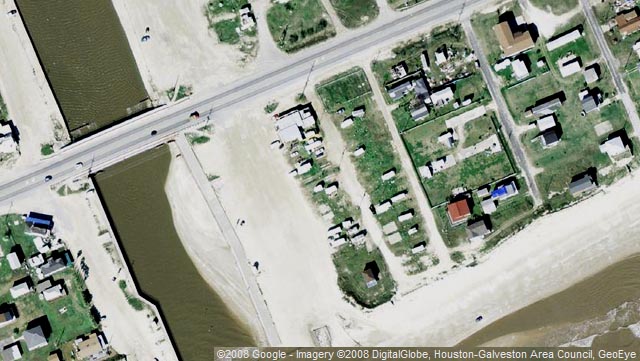 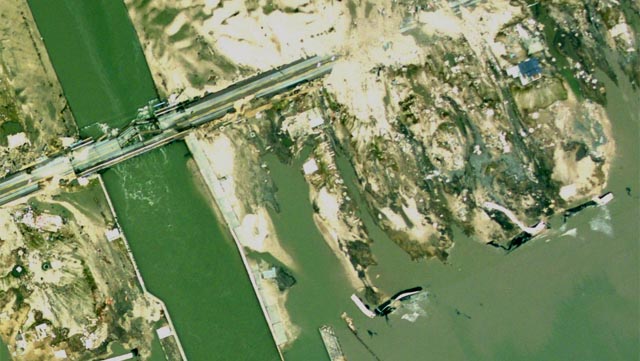 (Before and after pics via Jeff Masters)
Few places have noted the utter destruction of the towns on the Bolivar peninsula particularly Gilchrist. I imagine the reason is why there was so little appreciation of the parts of the Gulf Coast that were utterly destroyed by Katrina and Rita (as opposed to New Orleans, which missed the brunt of both) the reporters weren't where the surge was highest (which is why they still live) and the people who make up the media either don't care or are so hateful that they get a chuckle* out of Hurricanes that hit the areas of the southeast that they do not fit their narrow, provincial, definition of "hip".

The aftermath of IKE is remarkable, particularly for a cat 2 storm, but as was noted elswhere, the surge of this thing was unusually high due to the storms massive size. Only a very few storms in the past 150 years have done the kind of total annihilation of a populated area that this one has. The areas that were not subject to the full brunt of the surge like Huston and Galveston were very badly damaged by winds.

Regards Charities, I have recently heard good things about Portlight and the charities listed in this post have all had first hand vouchers.

(*That bastard Wolcott deleted his bigoted screed when  Hurricane Katrina sideswiped a place he could relate to.)

1 Of course, we all know why the national media haven't been paying any attention to this. It's because they can't figure out how to use it to make the Republicans look bad.

Ubu Lives! Ubu Roi has power and internet again. He has a post up on the aftermath. It looks like the surge WAS as bad as expected but was to the northwest...

Across the bay to the north, the Bolivar Peninsula, Crystal Beach, and High Islandâ€¦. everythings gone. Not damaged, gone. There were once dozens of beach houses on stilts there, and the area had several canals dug so that even houses 3 and 4 rows back from the beach could have docks for their boats. The occasional lonely piling is still sticking up, plus one very incongruous house that somehow survived. Other than that, water and the occasional bit of greenery. It appears that a historic â€œiron lighthouseâ€ is gone; the media chopper couldnâ€™t find it.

'Gwendolyne D. Barista' who moved not so long ago to the area sends this via E-Mail....

...there were a bunch of reports of a few thousands using their fireplaces when their power went out... AND THEN ABANDONING THEIR HOMES WITH THE FIRES STILL GOING. Loads of houses have burnt down. Good job, guys. *shakes head* I am so ashamed. It's called flashlights. It ain't like you people are going to freeze to death here in Texas...So then, much to everyone's chagrin (they can't claim to be surprised) the storm moved up into Houston and took out a lot of the downtown area. Unbelievable flooding and blown glass and debris. There was a snippet rolling by on the ticker that said 'Houston's Tallest Building Loses Nearly All Windows' or some sensational bullshit like that. It's true- all the glass is on the street ....It's intense. Also, there were notices of Boil Alerts in Houston in order to keep contamination down. That, and there was another alert that popped up later (so as not to appear related, methinks) that there had been a chlorine leak. GOODY.


Here is video of Galveston from the Coast Guard Falcon that was sent to assess the damage as soon as weather permitted. It is humbling.

You're right about that video. The crew of that bird really are brave to fly in that kind of weather.

Seeing all those houses burning was a bit horrifying. But you have to wonder how in hell they caught on fire in the midst of that much rain.

There were a couple of beach-front hotels they showed with a lot of their windows missing. It occurred to me that the wind was sideways, which means those windows blew out, not in.

I sure hope that most of that flooding has drained back out by now. I mean, it should have, right? None of that stuff is below sea level.

Ike Follow Up Ubu's last post was shortly before 01:00 local.
Weather Nerd# says the surge was less than expected which is hopeful but reports from the area# are grim. I hope the tide gauges didnd give false readings due to the storm.


Via Colleen Doran comes a list of vetted charities active in the area.

The worst is over at least.

1 There's indirect word (telephone) that Ubu is OK. No important damage to his house, and everyone is safe. But power and internet are out, so it may be a while before we start seeing blog posts from him again.

Ubu Blogging Ike Ubu Roi is unable to leave Houston due to family obligations. He is live blogging the calamity (with occasional pictures) as long as his connection lasts from his primary blog, Houblog.

UPDATE:  Horrible news...Ubu reports that  40% of Galveston has refused to evacuate...
...dear God.
Galveston was utterly destroyed in the 1900 storm. That island is going to be under water and buffeted by Hurricane force winds for hours. Thousandd may be dead in a matter of hours.

Weather Nerd is right, this storm was seriously under-hyped.


UPDATE 2:
Reports are that the storm surge will reach 31 feet at high tide...Galveston's seawall is 20 feet high. There are reports of fires throughout the county as transformers explode...
Ubu reports that the Galveston seawall is over topping at 11:40 local
Very nearly everyone on the island could be dead by morning.

They Don't Like Ike Ike is a true catastrophe. The hurricane has killed over 60 people in the Caribbean and devastated the Turks and Caicos Islands, reportedly destroying 80% of the buildings in the British territory. The thing has been hammering Cuba from both sides and despite crossing that islands high mountains seems has only weakened a bit. soon, after another gut punch to the Crocodile island, it is going to saunter into the Gulf of Mexico, most likely regain strength and bring despair to the USA or USM. If you are in that cone start reading your calamity kit.
(Hang on Ubu)

Excellent weatherblogging and first hand reporting at Stormcarib.
Charities that are active in the area.
( I have no info on these though I assume the BRC is legit)
British Red Cross
Oxfam America
The Order of Malta (Which handles AmeriCares Caribbean Charities)