Bow Before the Power of Chlorophyll...And Coffee 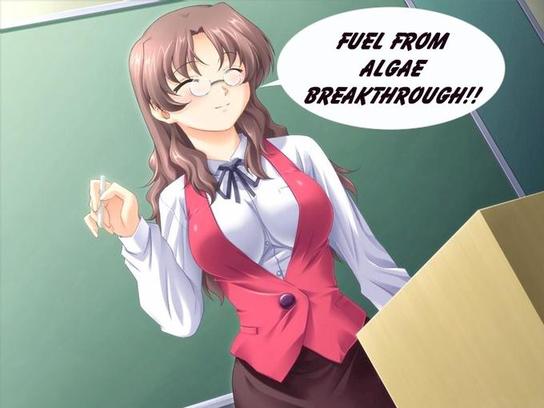 Artist unknown
One of the Brickmuppet's Crack Team of Science Babes(tm) brings us news of a couple of reported breakthroughs in the refining of fuel from Algae.

First comes this story concerning a much improved refining process. What is described as a "continuously flowing fixed-bed" process allows a vast increase in efficiency and reportedly can be managed to produce no waste water. A big advantage of this method is that it uses a reusable catalyst rather than expendable reactants. Finally, as its name implies the process is...continuously flowing, which removes the "filling/emptying reaction tanks" stage and massively improves flow output. One of the developers  This comes on the heels of the sucsessful testing of a seawater algal oil farm in Florida. This produced a thousand gallons of refined ATSM certified biodiesel on an eight of an acre...though the time interval is not mentioned.  There is more on this here.
This is particularly big news as they not only were using seawater..but open ponds.

Getting this performance from a SEAWATER species in open ponds vastly increases the potential locations and at a stroke reduces the fresh water demands of such an industry.

Finally, a recent breakthrough in biodiesel from discarded coffe grounds may at first blush seem to be of limited utility (one would want to use already used coffee grounds to avoid displacing excessive amounts of forests or cropland for coffee beans) but it could possibly have a non trivial benefit.
You see, the Coffee diesel is reportedly much more stable than some other biodiesels so there exists the chance that it may have some utility as an organic additive. This last is speculation of course, but it bears investigation.

Hydrocarbons are very hard to replace for many mobile power applications (vehicles...especially aircraft) because they are so good as energy carriers. With that in mind, Brickmuppet Blog has been touting the advantages and potential of algal oil for some time as the potential energy density advantages over other oil crops are stupendous (300 percent or more). Unlike other oil crops it need not necessarily displace food acreage. It is very renewable, should not impose a severe environmental impact if properly managed and such farms can (in theory) do double duty in waste water treatment. With Nuclear power providing the refining and distribution energy we have the potential to have a clean, sustainable and damned robust energy network both electrical and liquid.

Hmm? In the end, the problem with any form of solar power (and that's what this is) is that it is extremely diffuse. It doesn't matter what you're paving it with; you have to pave immense areas with some sort of technology to make it all work.

2 If it can be made to scale - and algae is the one thing suggested so far for which that's plausible - and those back-of-the-envelope numbers are right, then the Woomera weapons testing range in South Australia could produce enough oil for the entire planet.

'Course, some of it would glow in the dark, but them's just details.

3 It would seem that at this time there is no "one" solution to our energy problem.  However, this kind of biofuel could be part of the solution puzzle.  As we develop new fuels, one thing that will help is reducing our consumption... for example... if all of the cars in California averaged a minimum of 100 miles to the gallon... that would greatly decrease the needed acreage.  Factor in some of the gas or bio powered cars replaced with battery and solar... that would help.