In Search of the Goldilocks Loo

3 weeks ago when when Bob and I arrived here, we had been on a plane for 12 hours, had traveled through the subways for 3 hours and were generally beat.

When we got to our boarding house, I for one, plopped my lugage down in my room and made a beeline for he head...only to be greeted by this connundrum... 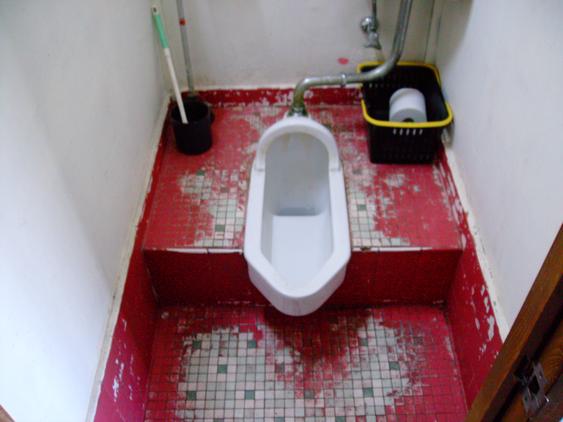 Anyway....I found out rather late that our boarding house,Casa Nova does have a western style commode in the other mens room. However, this began my search for  less primitive toilets.

At Shakeys Pizza in Shibuya, there is this techno marvel...note that it is rather at the other extreme. All those buttons...the ones labeles with Kanji? They controll various extra functions....only one of which is "flush"...these include but are not limited to: a bidet, heater and making a "flush" sound ??? the location  ensures that large people such as myself can hit the butons with their thigh at an awkward moment..... 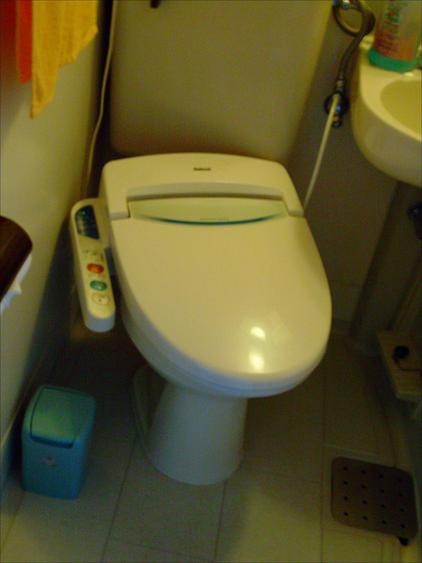 Now one might expect the Shinkansen, or bullet trains to be equiped with modern toilettes, perhaps even drifting into the realm of diminishing returns as the one above..... 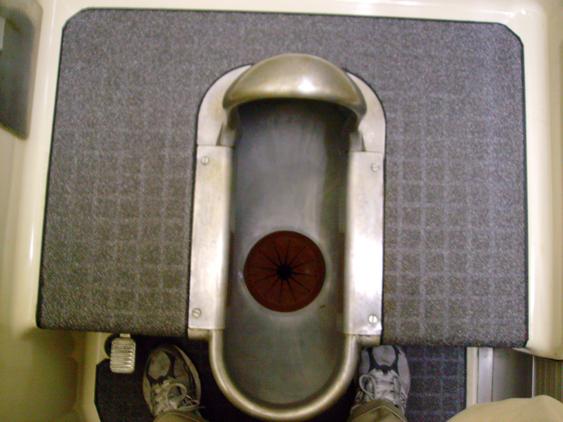 I did, however  find this behind the great Buddha of Kamakura.... 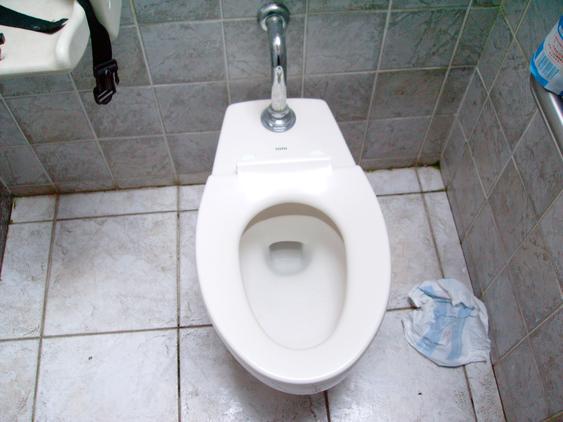 For those as confused by the first image as I was...Asahi. net has this barely helpful & NSFW diagram.

1 The red stuff in the first picture... uhm... did you cut yourself, Muppet?  Or was your gastrointestinal distress more severe than anybody's should ever be?

2 The flushing sound is so that the user can cover up any noises they may be making in the process without actually flushing and wasting water, or so I'm told.

Yeah... I've wondered about the toilets. Just when you think the Japanese are on the cutting edge of modernity...

Hobby Space News of the commercial space industry
A Babe In The Universe Rather Eclectic Cosmology
Encyclopedia Astronautica Superb spacecraft resource
The Unwanted Blog Scott Lowther blogs about forgotten aerospace projects and sells amazingly informative articles on the same. Also, there are cats.
Transterrestrial Musings Commentary on Infinity...and beyond!
Colony WorldsSpace colonization news!
The Alternate Energy Blog It's a blog about alternate energy (DUH!)
Next Big Future Brian Wang: Tracking our progress to the FUTURE.
Nuclear Green Charles Barton, who seems to be either a cool curmudgeon, or a rational hippy, talks about energy policy and the terrible environmental consequences of not going nuclear
Energy From Thorium Focuses on the merits of thorium cycle nuclear reactors
WizBang Current events commentary...with a wiz and a bang
The Gates of Vienna Tenaciously studying a very old war
The Anchoress insightful blogging, presumably from the catacombs
Murdoc Online"Howling Mad Murdoc" has a millblog...golly!
EaglespeakMaritime security matters
Commander Salamander Fullbore blackshoe blogging!
Belmont Club Richard Fernandez blogs on current events
BaldilocksUnderstated and interesting blog on current events
The Dissident Frogman French bi-lingual current events blog
The "Moderate" VoiceI don't think that word means what they think it does....but this lefty blog is a worthy read nonetheless.
Meryl Yourish News, Jews and Meryls' Views
Classical Values Eric Scheie blogs about the culture war and its incompatibility with our republic.
Jerry Pournell: Chaos ManorOne of Science fictions greats blogs on futurism, current events, technology and wisdom
A Distant Soil The website of Colleen Dorans' superb fantasy comic, includes a blog focused on the comic industry, creator issues and human rights.
John C. Wright
The Sci-Fi/ Fantasy writer muses on a wide range of topics.
Now Read This! The founder of the UK Comics Creators Guild blogs on comics past and present.
The Rambling Rebuilder Charity, relief work, roleplaying games
Rats NestThe Art and rantings of Vince Riley
Gorilla Daze Allan Harvey, UK based cartoonist and comics historian has a comicophillic blog!
Pulpjunkie Tim Driscoll reviews old movies, silents and talkies, classics and clunkers.
Suburban Banshee Just like a suburban Leprechaun....but taller, more dangerous and a certified genius.
Satharn's Musings Through TimeThe Crazy Catlady of The Barony of Tir Ysgithr
„āĘ„Éč„ÉĽ„Éé„Éľ„Éą(Ani-Nouto) Thoughtful, curmudgeonly, otakuism that pulls no punches and suffers no fools.
Chizumatic Stephen Den Beste analyzes anime...with a microscope, a slide rule and a tricorder.
Wonderduck Anime, Formula One Racing, Sad Girls in Snow...Duck Triumphalism
Beta Waffle What will likely be the most thoroughly tested waffle evah!
Zoopraxiscope Too In this thrilling sequel to Zoopraxiscope, Don, Middle American Man of Mystery, keeps tabs on anime, orchids, and absurdities.
Mahou Meido MeganekkoUbu blogs on Anime, computer games and other non-vital interests
Twentysided More geekery than you can shake a stick at
Shoplifting in the Marketplace of Ideas Sounds like Plaigarism...but isn't
Ambient IronyAll Meenuvians Praise the lathe of the maker! Hail Pixy!!