Another Shortfall in the red hull fleet.... CDR. Salamander reports that the Ruskies have surged ahead in the most awesomest icebreaker bow competition! 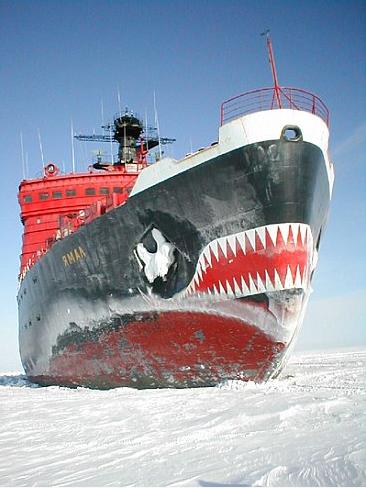 The crews of Healy and the Polar rollers had best make for the paint locker stat!

The article linked in CDR. Salamander piece is quit interesting and brings up a pressing issue facing the USCG.

What to do about the big icebreakers.

The Coast Guard is down to 3 polar capable icebreakers of which only the two Polar Class are really up to dealing with Antarctic conditions. 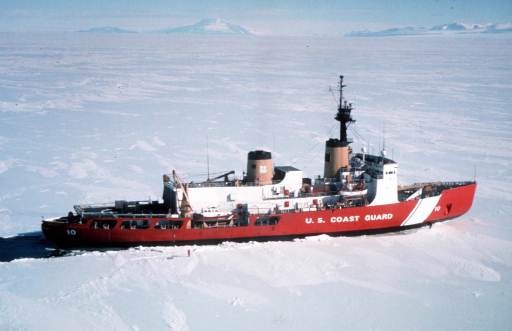 Designed during the cold war to be readily upgradeable to combat icebreakers for use clearing paths for allied ships in the arctic,the Polar Star class has given sterling service as research ships and tenders supporting the US presence in Antarctica.  Even with the many advances in icebreaker design since their commissioning the Polar Rollers have impressive stats. However, while still an excellent design  they are very old. More that 30 years of traveling to the antipodes to smash into freshwater ice that has been hardening for eons has taken its toll. Both the vessels are nearing the end of their useful lives.

Designed without any defence considerations and optimized for research, the Healy is a larger vessel with a smaller powerplant and predictably is not as good at crunching centuries old freshwater ice ice as the two older vessels. The ship is, however, capable of "getting by" in Antarctica and is quite adequate for Arctic operations. The ship is an outstanding research vessel.

With the Polar class on their last legs and the Healy really a research ship there has been talk of washing the Coast Guards hands of the whole (expensive) operation and adding Healy to the National Science Foundations Laurence M.Gould and Nathaniel B. Palmer.
This would involve finding a contractor to operate her as the NSF doesn't actually man those icebreakers.

As tempting as this might sound, icebreakers are not just science ships.Icebreaking is a Coast Guard function by statute. Antarctic support is as well and there are other issues that need addressing....

For instance, Healy is seeing a LOT of use, not just hauling scientists around and providing sefvices for the North slope, but simultaneously showing the flag as the US, Canada, Denmark, Norway and Russia compete to explore the rapidly thawing arctic ocean and lay claim to navigation rights and resource deposits in their overlapping claims. This is an important area on national interest and the CG being a military, but also with civil responsibilities and expertise is probably the best positioned to deal with this.

It gets worse. The arctic is, as mentioned above, becoming far more busy. This means more people that need saving from icy waters,  polar bears and killer whales. While Many SAR functions can be done by aircraft, (airships might be a good fit here) nothing compares with the carrying capacity of a big ship. Additionally as commerce increases the Coast Guards statutory icebreaking responsibilities become more important to northern Alaska.

Pollution response in the delicate northern environment may need vessels with large skimming capacity and an incinerator for burning skimmed oil. While contractors handle most spill response today in accordance with federal law, the CG has a responsibility to be ready to respond if the contractor drops the ball, or if, unusual circumstances overwhelm the contractor (as does happen).

This doesn't even get into the Antarctic responsibilities the CG has (the US recently had to contract with the Russians for the use of Krassin) or the fact that sealift, both humanitarian and strategic (and, occasionally, sea control) can on occasion benefit from having an ability to break ice.

The National Academies agree and published this piece in 2006 recommending the construction of 2 full capability icebreakers to replace the Polar class. This is a minimalist approach IMHO. Two and 3/4 icebreakers arent going to cut it. Icebreakers require a lot of yard time (they deliberately run into ice after all).

I have no idea what the cycle times and maintenance requirements for these vessels are but six seems like a good number.

I arrive at this number by the scientific method of looking at the total number of National Security Lemons planned and subtracting the number built or too far along to terminate which is two. The problems with the class seem to be less with the design than with contractor quality control, but they are quite expensive vessels.

Reorder the remaining NSC's as icebreakers.

The NSC's cost  as much as the entire defense budget of Ecuador.

The proposed Offshore Patrol Cutters are roughly the size of the current Hamilton class...(which are very successful as high endurance cutters after all). 6 If a total of 33 cruising cutters is needed then order 33 OPC's and start building them in the very near future. There are plenty of decent designs for OPV's on the market and I suspect that the requirements for the NSC are rather gold plated. In another rant I mentioned that....

Something as expensive as the LCS is silly. A 45 knot warship with a full ECM suite is not needed for this. Indeed the USCG requires rather heavier scantlings and shell plating to survive in the worst sea states. It should also be lightly ice strengthened. 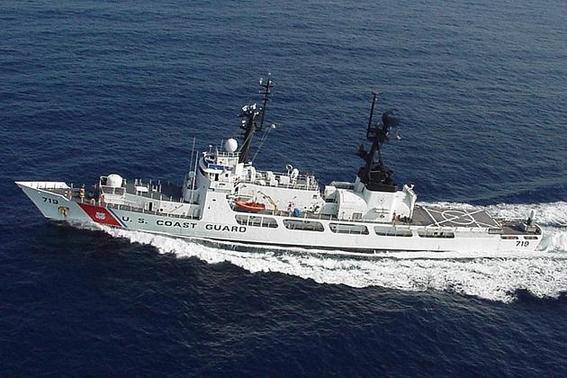 What is needed is an updated version of the 378 foot cutters seen above. Swap the gas turbines for diesels trading speed for fuel economy. 24-27 knots is really enough if the ship has a helicopter and  pursuit boats. This sounds very close to the actual characteristics of the new Offshore Patrol Cutters.

Given the cost of the Bertholf class it seems entirely possible that an upgraded commercial icebreaker design could be bought at little or no net loss.

We need icebreakers and we're wearing ours out.

More on this from a Canadian perspective here.