Steampunk Submarine Here is an interesting bit of nautical history.

The Explorer, a submarine from the civil war era  has been identified on Pearl Island Panama. 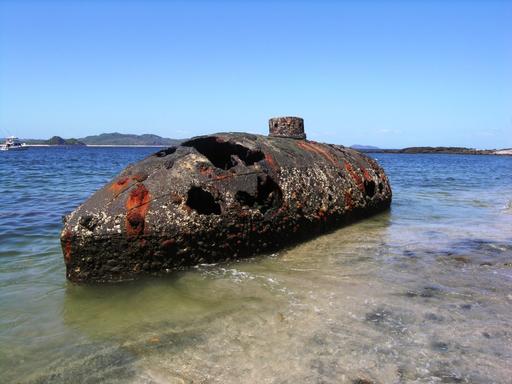 The vessel was ahead of its time with lockout chambers to allow divers to leave the vessel while submerged. Unfortunately as this resulted in the whole submarine becoming pressurized to the depth it was at, and because it allowed the crew to stay down far longer than normal, and because dive tables weren't invented until 1910, the entire crew perished after a long dive.

The use of the submarine for civilian applications (in this case pearl diving) was quite unusual a that time.

There seems to be some debate as to the origin of the submarine, some sites say it was built for the US Navy during the Civil War, some have said it was built afterwards for entirely civillian applications. Whichever, it's designer one Julius Herman Kröhl made significant contributions to the USN during the war, and if the Wikipedia entry is accurate was very much the unions answer to Mathew Fontain Maury...at least in underwater explosives.

There is also some debate about the cause of the death of Kröhl and his crew. The reports cited "fever" which likely meant malaria, however, the whole crew being stricken and the vessels dive profile would seem to make the decompression accident a more likely cause.

Much more including schematics  here.
Note that this article claims this was the first case of decompression sickness amongst US citizens. I'm pretty sure this is hooey as diving bells had been in use since the 1500s and hardhat diving was going on in the UK in the 1790s. There was enough interest in the US that an improved helmet was patented in the US in 1834. I'm pretty sure somebody had had a decompression accident before this. The article is quite informative for all that. I'm very upset I missed his recent talk at Nauticus.

This story is particularly sad because the sub worked! It had been tested several times without incident. If dive tables had been available the vessel would have been a success.

Sometimes progress fails for one missed detail or unknown factor. 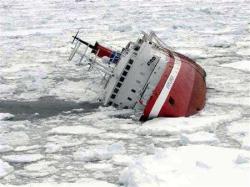 The Canadian Cruise ship Explorer has been stove by a small iceberg off Antarctica! In this photo she is on her beam ends as I type this may already have sunk. More here

The crew and passengers were rescued by the Norwegian cruise ship Nordnorge which transported them to King George Island. They will be transferred to the Chilean research station there and be flown to Punta Arenas as soon as weather permits. 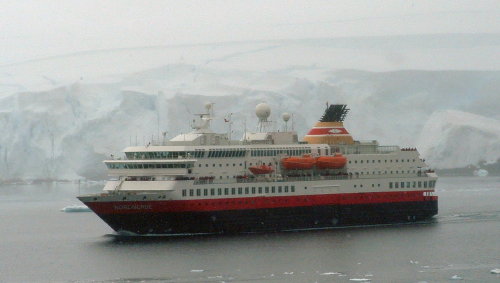 The National Geographic Society cruise ship Endeavor also raced to the scene and an ABC (US) reporter aboard filed this report with video. 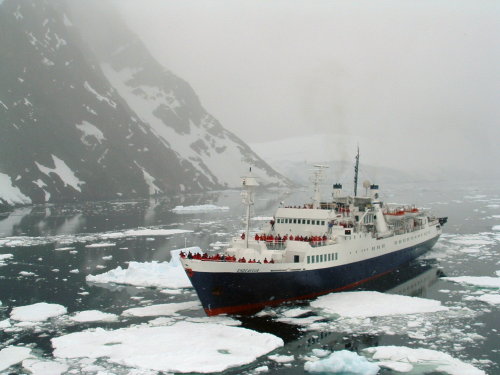 The MV Explorer was an interesting  ship with a unique history. Constructed in 1969 the "little red ship" was an ice strengthened cruise ship ahead of her time in that she was intended for what would later be called "eco-tourism".

The vessel was the first civilian ship to negotiate the northwest passage unescorted. She had sailed farther north and farther south than any other cruise ship and had been the first cruise ship to sail the full length of the Amazon and the first cruise ship to dock in Iquitos Peru. The vessel had rescued the crew of an Argentinian vessel that had struck a rock off Anvers Island and had been used to conduct relief and medical operations in the Amazon.  She was bought by the Canadian ecotourism company G.A.P. Adventures in 2004.

Some question is being raised over "deficiencies" found by both Lloyds inspectors in the UK and Port State Control inspectors in Chile.

Deficiencies recorded were: two on fire safety measures; one on life saving appliances; one for ship's certificates and documents, and one deficiency recorded for structural safety. She was seen at the time in Greenock's JWD dock for repair

At least one of the deficiencies in Chile was listed as "not required" which may seem odd at first blush. However, it is likely that it was something that was only required by the 1974 SOLAS treaty.

Being built in 1969, the ship was built under the Survival of Life At Sea treaty  SOLAS 1960 convention which is much less stringent than the currently enforced treaty (SOLAS 1974). For one thing the 1960 treaty allows open lifeboats which is why some of the Explorers passengers were exposed to the elements before rescue. Vessels built after May 1, 1980 fall under the newer more stringent requirements. The ship had reportedly passed inspection before leaving port and was reported to be in good shape.

The fact that the ship was crippled by a hole "the size of a fist" is weird. There may have been additional cracking that made the flooding uncontrollable. If so it may have had to do with the age of the vessel and undiscovered preexisting cracks.

Keep in mind that while I do a bit of Port State Control, I'm not a marine casualty investigator. So this is just speculation.

The rescue effort was remarkable for its international nature, with coordination from the US and Argentinian Coast Guards, participation by Chilean  Army and Air Force units with the actual rescue by US and Norwegian merchant ships.

Bravo Zulu to the Captain and crew of MV Nordnorge for pulling off a flawless rescue effort in difficult conditions!

Is actually a completely accurate and  serious article...which makes it all the more priceless.

Saved here in case they realize that the acronym for unidentified floating object just doesn't work in layspeak.

UPDATE:  Stephen Den Beste has found another completely accurate yet distracting headline associated with this calamity.
Bountiful Woman Rescued From

Yay! They saved a bountiful woman!
(Now we can make up for some of those environmentalists! )

This private organization, which operates on donations is interesting in its own right. It is a very highly regarded Coast Guard, yet is not a branch of the German government. It fulfills the niche of Coast Guard (minus any statutory responsibilities) without taking a cent of taxpayer money (unless said taxpayers donate it).

Equally interesting is their kit, for they have some of the most advanced rescue boats on the planet. I've mentioned some of their ships before, but this gives the detailed overview of them that I'd been looking for for some time. Robust and ice strengthened vessels almost exactly the size the Coast Guard is looking for, they certainly bear looking at.

Of course these vessels have limited area of operations and so range and crew accommodations are  less than a Coast Guard cutter would have, but they may have some potential for further growth.

The large rescuee accommodations are a very useful feature  and the helicopter decks, while small, give these vessels an interesting capability for such a small  patrol boat. 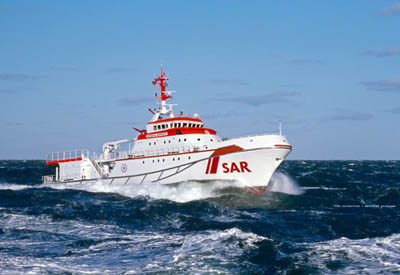 I spent most of the day drilling with the Coast Guard Reserve this weekend.

It is a sloow weekend in one of the nations busiest ports. It is actually possible that I may spend the entire weekend guarding the coast from behind a desk.   Feh....

One thing I did have reinforced this weekend is how important and benneficial a good Chiefs Mess is to a unit.

I've volunteered for a short stint of active duty from Christmas until the second week in January. (basically my annual 2 weeks plus a few extra drills)  I suspect there will be very little desk jockeying then.

(No I'm not blogging from behind the desk....that would be an abuse of Govt. rescources, I'm at a Cybercafe doing some online studying and such before heading home...computer's still in the shop)