69 years ago Though the Normandy invasion is now thought of as D-Day, it was not the name of any specific operation. D-Day was the code word for the day of an amphibious landing. Most amphibious operations other than raids that the US conducted took place on their D-Day. Logistics were arranged around that and used dates of D-Day +1 D-Day+2 so that plans did not have to be rewritten in the event that a landing was postponed.

Thus D-Day was simply the landing operation for the Battle of Normandy, which lasted from June 6 to late August 1944. That battle is considered to have ended when Alied forces began to cross the Seine.

It is easy, with 20/20 hindsight to think of great historic battles as having foregone conclusions, but they were not ordained to come out the way they did. Stalingrad, Midway and D-Day could have gone very differently.

Those who fought that terrible battle that began on June 6, 1944 did not have the benefit of knowing pretty much anything about what was beyond those fortified cliffs. If they had not persevered, history would have been written very differently.

Many of those who went ashore that day did not live to read of their contribution to history. They wrote that history in their blood. 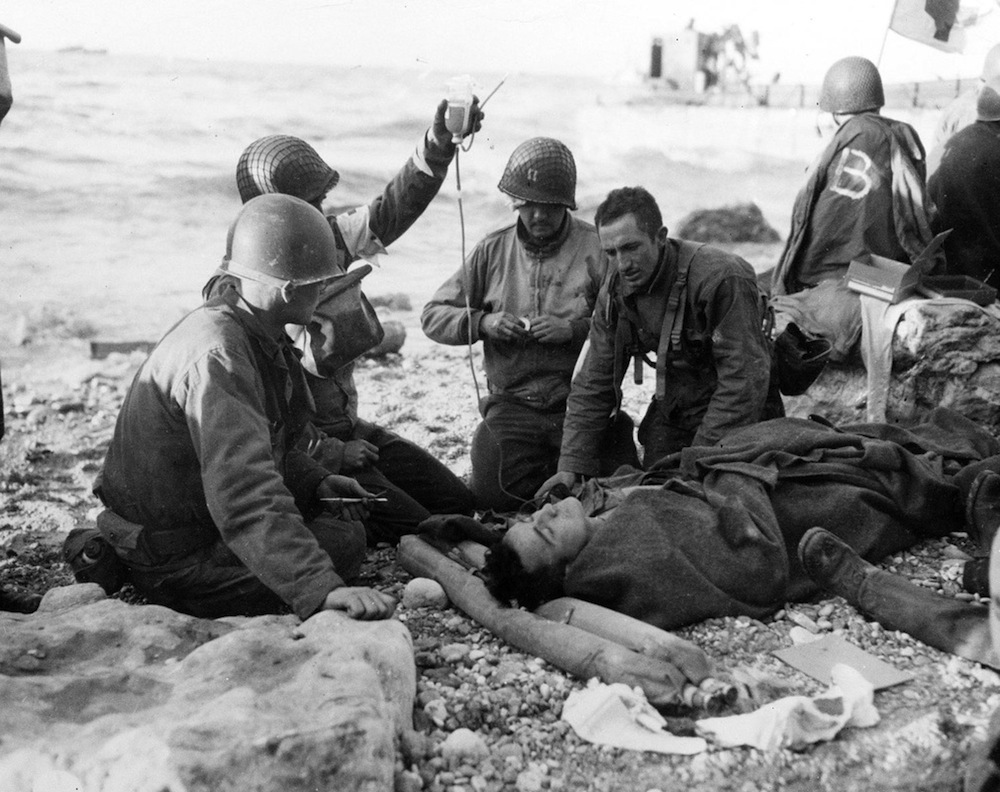 That men advanced under such withering fire boggles the mind. 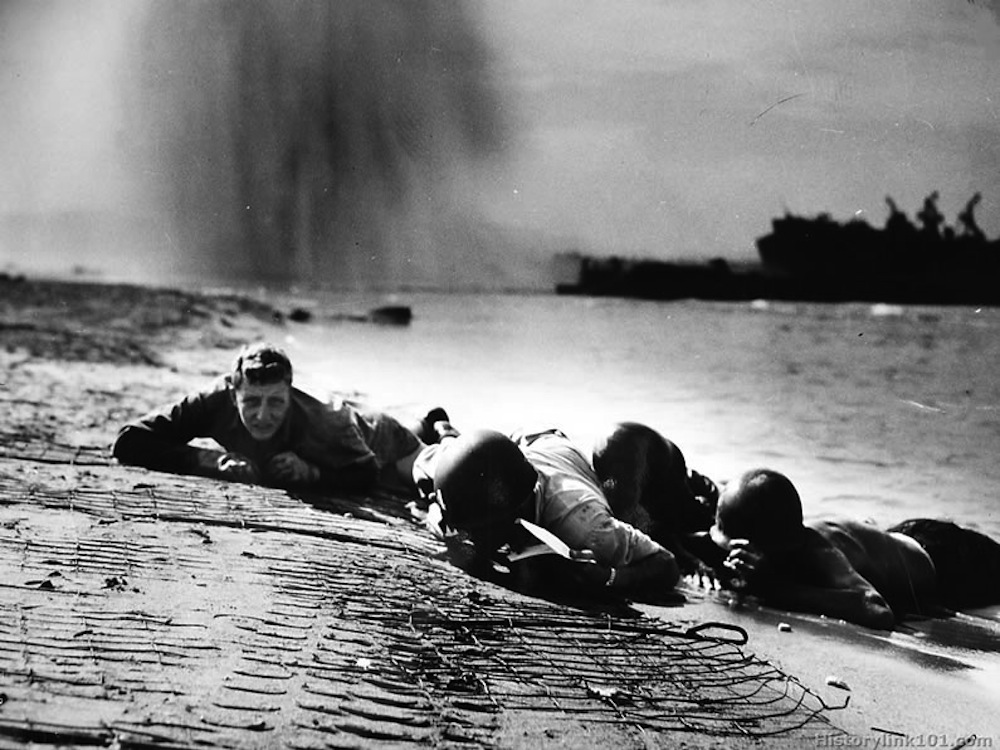 The Germans had placed mines and obstacles along the beach. If a landing craft grounded on a rock or other obstacle short of the beach the troops had to reach the beach the hard way. 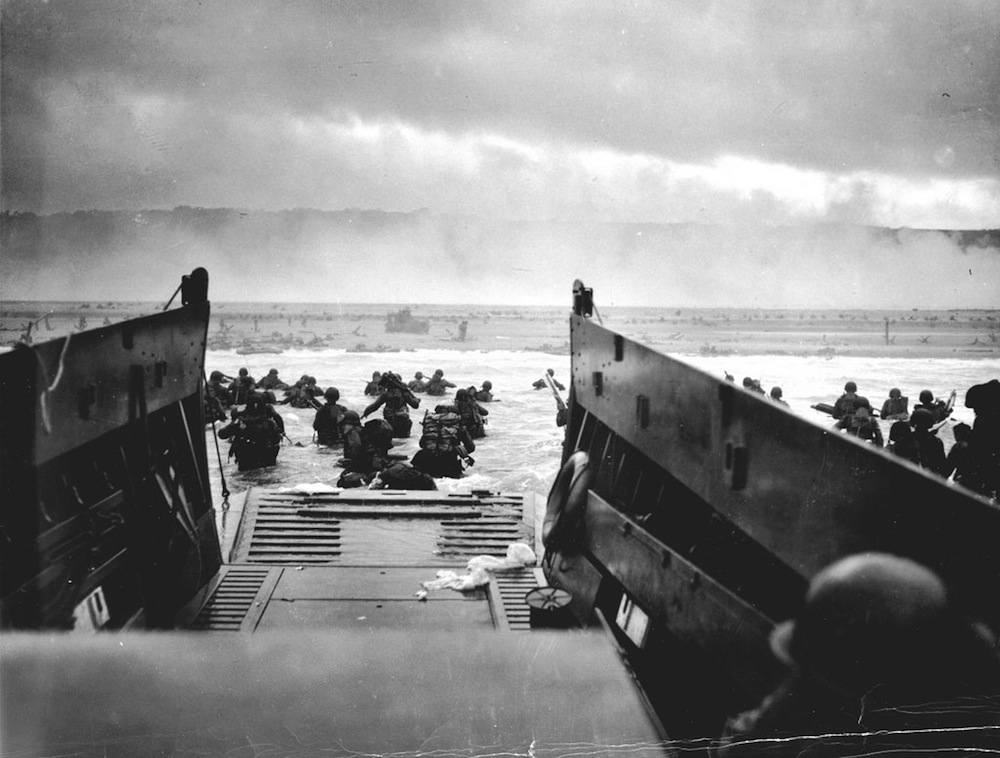 Operation Neptune was the naval side of Overlord, and it was costly a well. Here a minesweeper and a PT boat attempt to rescue survivors from a US minesweeper that is no  longer recognizable as a ship.

In addition to mines the Germans sent aircraft and small coastal submarines to wreak havoc. 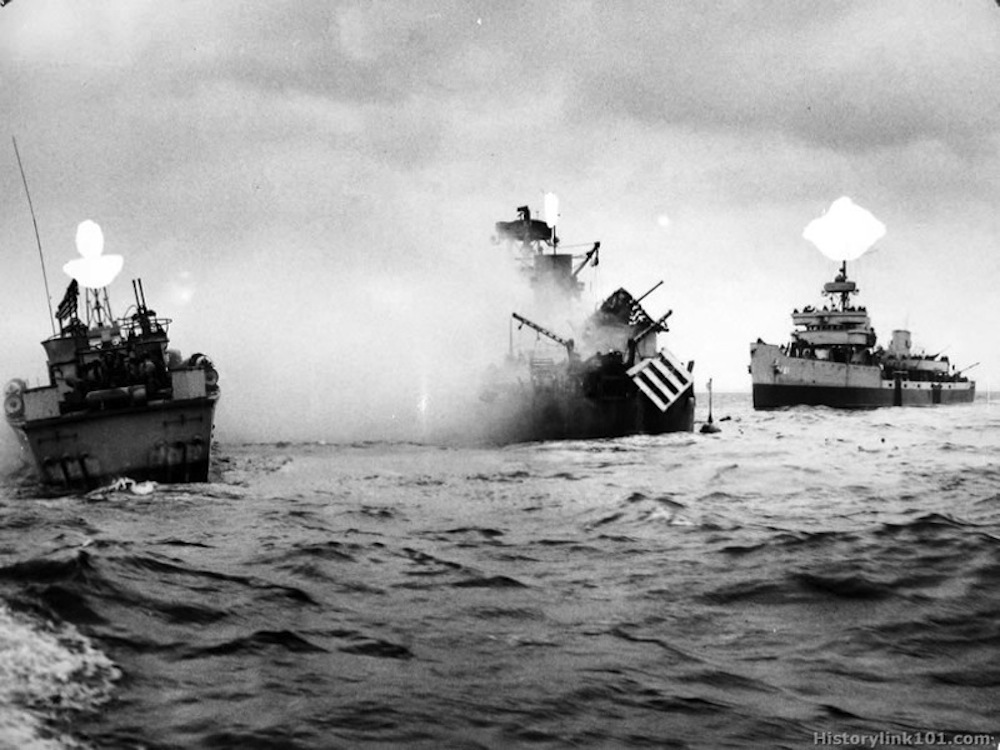 Note that the wartime censor has obscured the vessels radar arrays.

The old battleship Texas (BB35) was built in 1912 and was considered obsolete even at the end of WW1. As such she was powerful enough to lay fire support, but sufficiently expendable to be risked inshore. When the landings at Omaha Beach began to go pear shaped, Texas closed to within 9000 feet of the shoreline. Under intense fire from German heavy artillery she took out pillboxes, sniper nests, heavy guns and  obliterated the fortifications at the western exit of the landing zone. When the Army Rangers tasked with taking the cliffs began to run out of supplies, Texas ran close inshore and dispatched a landing party to provide the Rangers with ammunition and bring the wounded back to the old ship for treatment....they also brought back 27 prisoners. Texas continued to fight until she had exhausted her ammo, she then zipped across the channel, reloaded and came right back.

This picture was actually taken several days  after D-Day when USS Texas, USS Nevada, USS Arkansas, HMS Glasgow and HMS Enterprise thundered into the heavily defended Cherbourg harbor with the aim of taking out the heavy guns that menaced the allied forces. Moments after this picture was taken, the battery that caused that shell splash scored a hit on the old battlewagon's bridge. Nevertheless, the old ships took out the heavy guns protecting the town.

Incredibly, despite much damage her only fatality was her helmsman.

General Theodore Roosevelt Jr. was one of Eisenhower's staff tasked with applying lessons learned from his experiences at Sicily and Salerno.  Not considered fit for combat due to his previous war wounds and a heart condition,  he nevertheless asked for and received permission to go ashore as an observer.

As such, he was the only Allied General to land with the first wave of troops. When things went horribly wrong on Utah Beach, Roosevelt took command, and even though he had to use a cane to walk, rallied the troops and deployed them to best effect. He salvaged what could easily have been a fiasco.

His medal of Honor Citation:


For gallantry and intrepidity at the risk of his life above and beyond the call of duty on 6 June 1944, in France. After 2 verbal requests to accompany the leading assault elements in the Normandy invasion had been denied, Brig. Gen. Roosevelt's written request for this mission was approved and he landed with the first wave of the forces assaulting the enemy-held beaches. He repeatedly led groups from the beach, over the seawall and established them inland. His valor, courage, and presence in the very front of the attack and his complete unconcern at being under heavy fire inspired the troops to heights of enthusiasm and self-sacrifice. Although the enemy had the beach under constant direct fire, Brig. Gen. Roosevelt moved from one locality to another, rallying men around him, directed and personally led them against the enemy. Under his seasoned, precise, calm, and unfaltering leadership, assault troops reduced beach strong points and rapidly moved inland with minimum casualties. He thus contributed substantially to the successful establishment of the beachhead in France 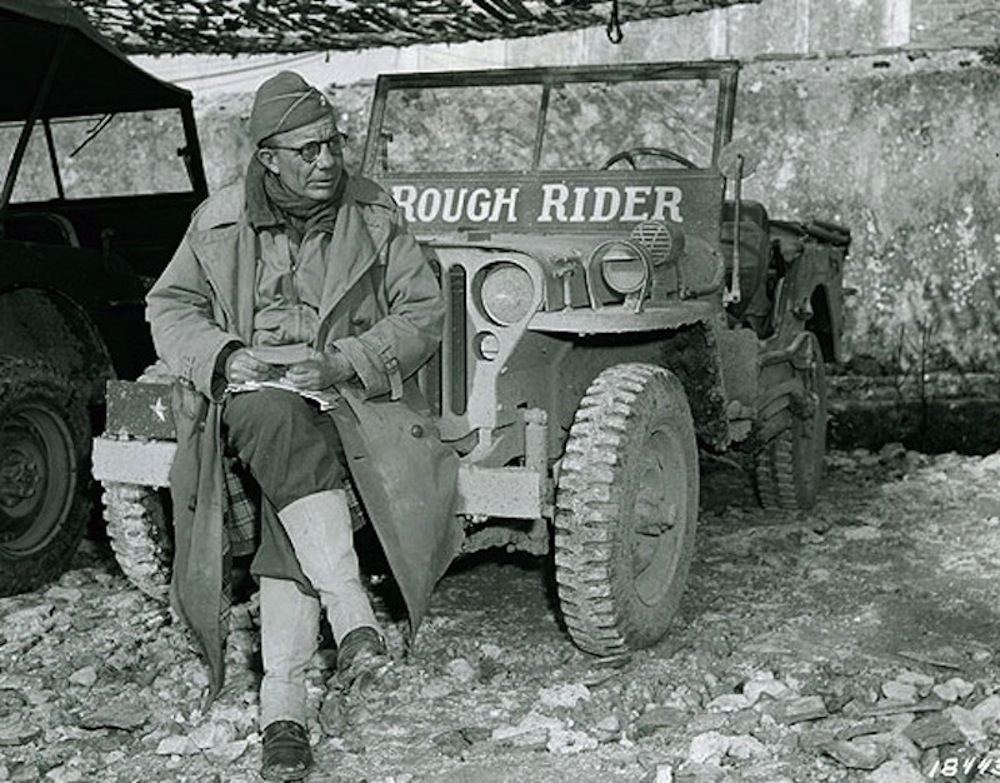 He died a few weeks later of a heart attack, in a tent on the front lines. He is buried in the Normandy cemetery in France.

1 I learned of  General Roosevelt's actions via the movie The Longest Day, but did not know that he had died that soon after the invasion. Thanks for teaching me about this.

Of course, it was the destroyers who really saved the day. One destroyer skipper, on his own authority, ordered his ship in close to shore and started shelling the German positions. When the admiral in charge of destroyers saw this, he ordered all the others to do the same.

Because the destroyers drew less water, they could come much closer to shore, and aim by eye.

The destroyers drew fire, which therefore wasn't aimed at the beach. And their fire was more effective than the earlier bombardment. Plus the sound of shells going in, and the sight of explosions on the bluff, gave the men on the beach heart.

My favorite story from Omaha beach has to do with one of those destroyers. There was an amphib tank which had lost a track at the water line and was immobile. The fire control officer on one of the destroyers saw that tank aim at something and fire at it. He couldn't tell what, but evidently the tank commander thought it was important, and he could tell where the round had landed, so he used his targeting equipment to place a round from the destroyer on the same location. Then he went back to watching the tank.

The tank commander's hatch opened and he popped out and looked around, saw the destroyer, waved at it, then he buttoned up and fired at something else, and the destroyer then fired at the same place. So until the tank ran out of ammo, it served as forward fire control for the destroyer.