On The Fires and Other Mishaps Befalling U.S. Food Processing Plants
In the comments to a previous post, commenter StargazerA5 noted reports of food processing plants that have been blowing up over the past few years.
Here is a list I was able to nail down of 25 that have happened this year. Most really don't look like "enemy action"...but there have been at least 25 this year.
That seems like a large number.
Here they are, with links to news articles.  I gleaned this list mainly from the My Patriot Supply newsletter, Tim Pool's channel and loose talk on Discord.
1. Van Drunen Farms Tuthill Facility, Momence, IL [Jan. 2]
Seven percent of the 80,000-square-foot Van Drunen Farms freeze-drying facility in Momence, Illinois was burned and declared a "total loss.â€ This MAY be one reason freeze dried 'survival food' has gone up so much in the last few months, though it had been skyroketing before that.
2. Cargill-Nutrena Feed Mill, Lecompte, LA [Jan. 13]
An explosion of unknown origin heavily damaged a feed plant that provides feed for aquaculture, cattle, horses, and poultry.
3. Oregon Potato Company, Warden, WA [Jan. 22]
An explosion destroyed a potato/corn processing plant. Other reports I've seen noted correctly that this plant was responsible for supplying most of the western U.S. However, all omitted the little detail that what this plant supplied the western U.S. with was potato chips and nachos. This is not as big a catastrophe as some might suppose.
4. Winston Weaver Company, Winston-Salem, NC [Jan. 31]
A massive fire at a fertilizer plant miraculously resulted in no injuries, despite tons of ammonium nitrate on site. Still, the nation's fertilizer production took a hit.
5. Wisconsin River Meats, Mauston, WI [Feb. 3]
A fire destroyed a meat packing plant in Wisconsin.
6. Louis Dreyfus Company, Claypool, IN [Feb. 16]
The largest Soy-processing plant in the U.S. caught fire. It appears to be a fire in a filter used to de-dust the air and prevent fuel air explosions, but I'm not sure. The article mentions concerns about this disrupting soy production in the U.S....um....
7. Bess View Farm, St. Albans, VT [Feb 18]
A fire at a dairy facility.
8. Shearer's Foods, Hermiston, OR [Feb. 22]
This one has been widely reported and it was a serious fire that caused injuries. the plant will be down for 18 months. However it made snack chips and cookies....so this is not exactly vital infrastructure.
9. Nutrien Ag Solution, Sunnyside, WA [Feb. 28]
A fire at the Nutrien Ag Solution facility (fertilizer plant?) in Sunnyside, Washington may have been a near-run-thing since an evacuation order was issued for a half-mile radius of the facility. The fire burned through 1.7 million pounds of sulfur used for fertilizer. No one was injured in the fire, but there's even less fertilizer now.
10. Nestle Frozen Foods, Jonesboro, AR [Mar. 16]
A large fire (took 24 hours to contain) at a Hot Pocket factory. No one was killed, but the Hot Pockets got hot.
11. Wayne Hoover Farm, Longswamp Township, PA [Mar 13]
Feb. 23, 28 and March13 there were a series of fires in and around a Dairy in PA. They have all been declared accidental. The cause given in the article is electrical fire.
12. Plainfield Walmart Fulfillment Center, Avon, IN [Mar. 16]
This was a consequential fire. A 1.2-million-square-foot Walmart grocery distribution center burned for multiple days in Avon, Indianaâ€”350 fire fighters and 30 fire agencies fought the blaze, which consumed massive stocks of food bound for locations all over the country. This has reportedly put a strain on Wal-Mart's supply chain. Note that the BATFE is still investigating the fireâ€™s cause, 3 months later.
13. Penobscot McCrum Potato Processing, Belfast, ME [Mar. 24]
A fire a tater-tot factory.
14. Maricopa Food Pantry, Maricopa, AZ [Mar 28]
Not a food PRODUCTION facility, but a storage facility for a charity. This is probably not part of any large scale campaign, but is one of these stories that has been widely reported, sans context.
15. Rio Fresh, San Juan, TX [Mar. 31]
No injuries. But no onions.
16. East Conway Beef and Pork, Center Conway, NH [Apr. 11]
This looks to have been quite serious, the loss of more meat-packing capacity is most unwelcome now, though there will likely be plenty to spare by fall. I like how the report mentions that the cattle were "rescued". As they were at an abattoir, I suspect their reprieve will be short.
17. Gem State Processing Plant, Heyburn, ID [Apr. 13]
A plane crashed into a potato processing plant. This is tragic, but did not disrupt the plant in any way. It does not seem suspicious, but this was the incident that seems to have gotten people talking about food plant terrorism last month.
18. Taylor Farms, Salinas, CA [Apr. 13]
This looks to have been a close call due to the large quantities of anhydrous ammonia on site
19. Azure Standard, Dufur, OR [Apr. 19]
Organic food distributor Azure Standard lost its headquarters to a fire on April 19. This was offices, not a production facility and it is unlikely that a serious effort to disrupt food supplies would waste resources on something as niche as organic foods.
However!
The facility has the word "Azure" in its name. This gives the sad lonely weebs who run this blog a dubious but sufficient rationale to post a pic of Zara, from Azure Lane that is appropriate to the season, but not the workplace. 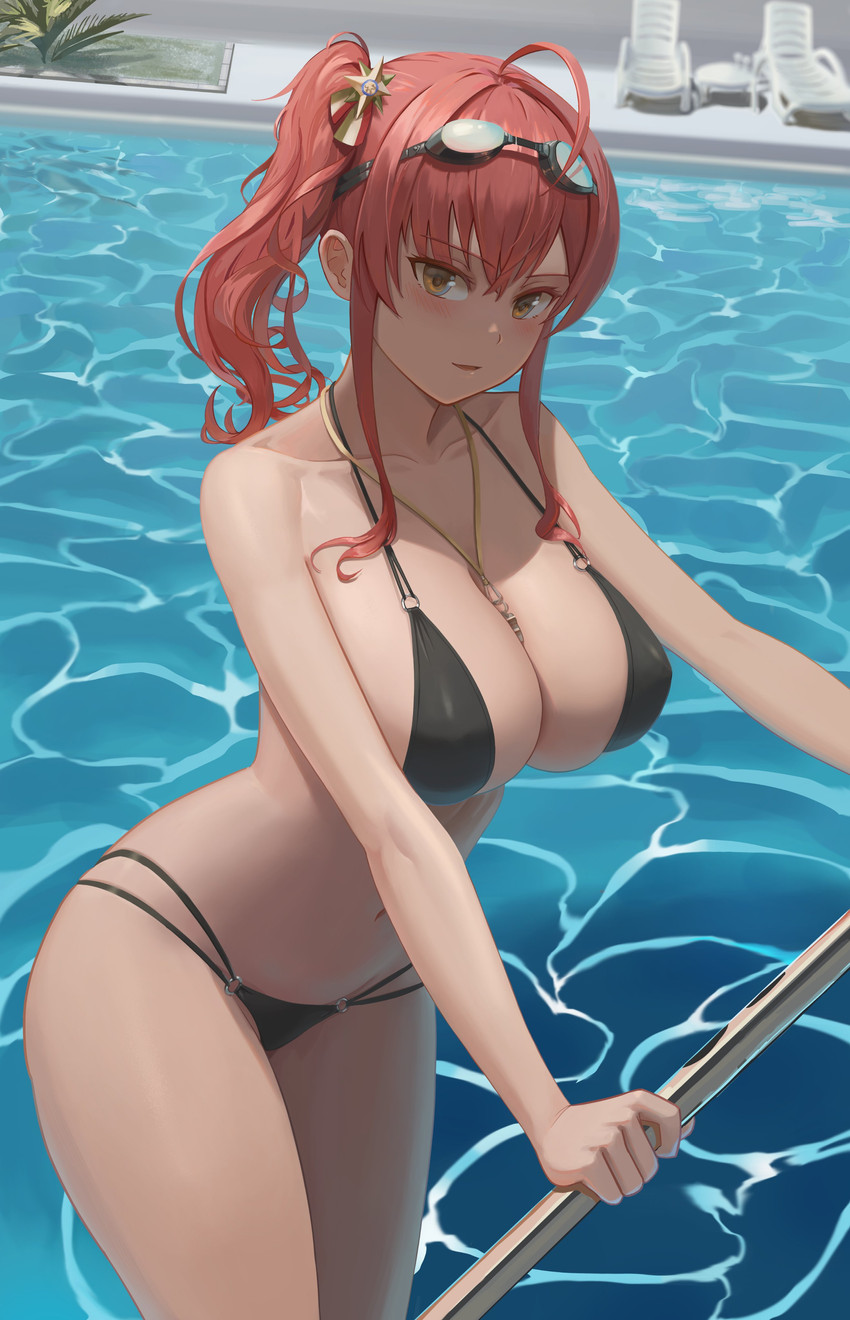 Art by Smoothatin/Sejin
20. Nutrien Ag Solution, Leoti, KS [Apr. 19]
This one is interesting because the were able to go into their file and use a 'stock photo of a Nutient AG Solutions plant burning'. (see photo in article #9 above, this is the second from the same company on this list)
21. General Mills, Covington, GA [Apr. 21]
OH MY GOD!1!! Another plane crash! Why are planes kamikazeing in to our food processing plants!?
Actually, a plane crashed near a FPP, on property owned by the plant where plant equipment was stored. The plane was also carrying passengers. The article mentions two passengers killed but does not mention the pilot. Like the other plane crash above, this does not seem to be suspicious, but it's one of the ones that really got people talking about this matter.
22. Perdue Farms, Chesapeake, VA [Apr. 30]
A fire at a soy processing facility  [political/cultural joke goes here]. As it happens, this is only about a 45 minute drive from Brickmuppetburg. Minimum impact, no one killed. Included for completeness.
23. Rail Car Derailment, Ft. Macleod, Alberta, Canada [May 22]
Train derailments seem to be up this year, probably due to cascade effects of the supply chain chaos. While it TECHNICALLY involves food infrastructure it's not really evidence of targeting food production. But, hey, it got us to 25.
24. Forsman Farms, Stockholm Township, MN [May 28]
200,00 chickens killed on an egg farm in a massive fire. Honestly they frequently kill more chickens right now culling for chicken flu (which is very much a thing now). A fire in one of these chicken farms can start because of dust/dander and they are terribly fast when they do. This would not be worth mentioning but for all the rest.
25. JBS Foods, Green Bay, WI [June 7]
Not much is known about this one, but it seems to have been minor due to the quick response.
25 of these incidents seems like a lot and a few few of the fires are suspicious, but that doesn't indicate a conspiracy.
The two plane crashes that have caused so much worry among some don't appear to have anything to do with any plot to incite famine.
What I suspect is happening (in most instances) is that we are seeing the results of the hysterical COVID response. People are overworked because of personnel issues due to the disease and they are making mistakes. Also, maintenance has been perfunctory at best everywhere for over two years (this is also because of COVID) so I'd guess that contributes to why things are breaking. That certainly sounds plausible in the case of the plant where the dust filters caught fire. Note however that I am not a mechanic, nor an engineer. I have a degree in history so my opining on this phenomenon is just a layman spitballing.
I expect things are going to get worse before they get better.
Be careful out there.

1 While I can't speak to more critical infrastructure like all these mills, processing, and packing plants, I can certainly attest that property maintenance in general took a big hit. As my company is starting to re-open offices, there has been a ton of back and forth with property management companies about things like air filter replacement, fire alarm tests, fire extinguisher replacement, even things like annual elevator inspections, that hasn't been getting done the last couple years while the buildings have been mostly empty.