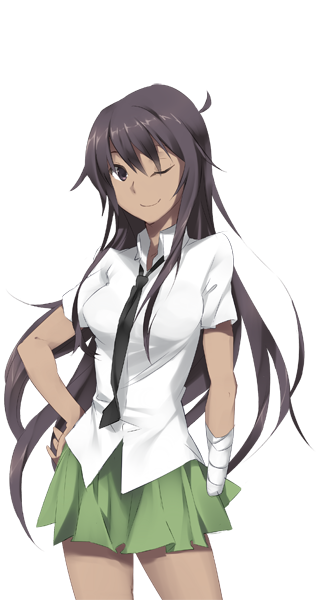 "Nothing at all."
Miki here is a game sprite and as such can't be doxxed, fired, DDOSed or otherwise struggled against in any meaningful way.
Oh, and on a completely unrelated note, she is totally the one who pointed out to me this Harlan Ellison rant from 1994.

1 Damn, 1994 might have been the last year I've read every single book nominated for a Hugo, either that was a damn good year for novels or else I was still in my indiscriminate consumption of SF fandom phase.
Who were the winners that attracted Ellison's ire?

3 Doug, back when Harlan was doing commentaries on the Sci-Fi Channel (and I think this clip is one of them), they announced him once with "If you haven't been insulted by something Harlan Ellison has said yet, you haven't been paying attention"...

4 Yeah, I was gonna say "this is Harlan Ellison being lovable."

5 Who were the winners that attracted Ellison's ire?

In the 1994 Hugos, Ellison's "Mefisto in Onyx" was beaten for Best Novella by Harry Turtledove's "Down in the Bottomlands."

Looking at the winners of both awards in 1994, I'm going to guess that his "untalented writer" is Jack Cady, winner of the Nebula Best Novella for "The Night We Buried Road Dog."  I only say that because Cady is the only winner that year that I've never heard of... upon looking him up, he was quite accomplished in both the SF and the Horror fields, like Ellison.

Not being an expert on either person, I can't really say.  Ellison, being the acerbic sort that he's known to be, makes it just as likely that he believes Kim Stanley Robinson is a no-talent hack, or Turtledove, or Charles Sheffield, or anybody else.

6 I remember SciFi Buzz, Vaguely.  It's kinda like remembering when MTV played videos.

Fortunately, almost all of Prisoners of Gravity is available on YouTube. If you want a TV show about SF literature, Commander Rick is as good a guide as you can find.

7 There was also FTL Newsfeed and the "newscasts" of Dr. Franklin Ruehl. The fact that those shorts amused me was, in retrospect, an early indication of the deep flaws in my character.   Of course the lede here is that in 1994 people had already started gaming the Hugo's system. As Mitch pointed out, this corresponds to the time that the awards began changing from a recommendation to a warning sign. This phenomenon predated by 20 years the antics of certain despondent juvenile canines . It is not the actions of those residents of fandom's metaphorical pound that distresses their critics, but the exposure of how the game has been played.

8 Around that time there was reportedly a decision to limit the growth of WorldCon, which conveniently favors the crowd that already goes, and probably enhances their sense of personal ownership of the award.

I wrote up a proposed rules change (It's all the rage lately) and yesterday it got an insane number of hits, since it was on Michael Z. Williamson's facebook page.

9 Jack Cady is apparently a guy who got a fair amount of awards on the literary side of sf and horror, but he doesn't seem to have published much outside of literary stuff. I agree that I've never heard of him, but apparently a lot of literary mainstream folks have.

OTOH, if you're talking about who was likely to have been on the Internet in 1994 and "asking for votes," I'd have to say Kim Stanley Robinson.

But yeah, I don't remember this kerfuffle at all. It would probably be worth it to search rec.arts.sf.written, except that Google's search engine for newsgroups really stinks.

In the 1980's I dated a woman who was a big-time science fiction fan. She went to a lot of conventions and always went to WorldCon, and I was always a bit amazed at just how seriously she took the Hugo ballot. They really do think they're doing something really important when they vote.

And yet, they'll say, "We're not hard core; THOSE GUYS are hard core." There's a denigrating term, "SMOF" which stands for "Secret Masters of Fandom" used to refer to the especially extreme fans. (Someone started a tongue-in-cheek convention called SMOFCON; I have no idea if it is still running.)

11 Jack Cady is apparently a guy... ...I agree that I've never heard of him, but apparently a lot of literary mainstream folks have.

Banshee, that is literally the only reason I assumed he was the target of Ellison's ire.  My assumption was that if I'd heard of them, it seems unlikely that they'd be considered "no-talent hacks."

It was only after googling him that I discovered that he'd also be a natural rival of Ellison, seeing how they both wrote the same sort of thing.  As I can't imagine Ol Unka Harlan passing up a chance to take a shot at someone he'd be competing with, it made him even more likely in my mind.

However, the number of ways that this logic chain can be incorrect is staggeringly huge since it rests upon two thin reeds: my knowledge of someone being a worthwhile predictor of something, and Ellison's thought patterns.

12 Turtledove is the sort of writer who is persona non grata among the awards people, but I've never noticed him online, and definitely not back in 1994.  Robinson is exactly the sort of writer who'd I'd expect to game the system - entitled and prone to morally muddled philosophizing.  But if he was online in 1994 it was in different circles than where I went... he was a "movement" guy, though.  Big noise among the regnant humanist movement of the time, that defeated the cyberpunks in the marathon simian poo-flinging tournaments of fandom in the long Eighties.