Police Chief J.R. Blyth, who was called in to investigate, described the discovery at the George Washington Hotel in Pittsburgh as 'the most grisly murder scene in his 35 years in law enforcement'.

Emma Sky is amused.
More importantly, the hotel has not cleaned this room in 2 years.

(note that's for Corey Haim, not for the unclean room)

3 I was going to say "my snark has completely failed me and I have no comment."   This makes the (truly) accidental blank post rather ironic, don't you think?

A Cryptic Message From the Interwebs I have been told to "Remember the name Matt Smith."

I have no idea.

1 That is the strangest looking Doctor ever. It's been a long road, and there have been some weird looking ones, but this guy is bizarre.

Costumed Crimefighting on the Rise The London Times reports that the US is crawling with superheroes.

There are, according to the recently launched World Superhero Registry, more than 200 men and a few women who are willing to dress up as comic book heroes and patrol the urban streets in search of, if not super-villains, then pickpockets and bullies.

Civic mindedness is all well and good but something is wrong with this picture...

â€œThis is a more serious business than it looks,â€ said Citizen Prime, whose $4,000 (Â£2,700) costume disguises an Arizona businessman and father of a toddler who thinks his cape, mask and stun-gun are cool.

Prime patrols some of the most dangerous streets in Phoenix but, like most Reals, is reluctant to speak about the villains he has dispatched with a blow from his martial arts-honed forearm. He does admit helping a motorist change a flat tyre.

â€œKids love the costume, so I seek to keep them out of the gangs today rather than take them on tomorrow,â€ said Prime who, at 41, regards himself as on the mature wing of the Real community.

What is wrong you ask? OK fine let me spell it out...

In these tough economic times one who is trying to set a good example for the youth of today must be frugal.
So...go basic...
All you need is a mask, some sort of costume...say a ninja suit with a logo, a stun gun, some twist-cuffs and maybe night vision goggles. You can get the basic kit for a hundred fifty bucks and look damned snazzy if you're friends with a cosplayer who is inclined to enable your wacky civic minded shenanigans.

Assuming you get decent body armor add 2-500 dollars and if you have decent first aid training a hunters first aid kit with trauma pads (in case you happen upon an injured person) is going to be around 60 or 70 dollars.

One should be able to put something pretty impressive for under a thousand bucks.

What, exactly, did 4 grand buy? 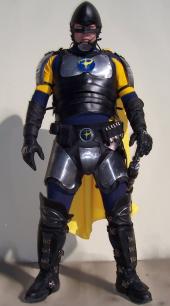 Citizen Prime may have overspent, or he may have gimmicks we don't know about...like a defibrillator a bat winch or a Vespa-Prime or something. Also gortex is expensive and he may have body armor more comprehensively distributed which would add up quick.  Regardless, Phoenix may be a teensy bit safer tonight...It is certainly more colorful.

For those of you concerned about whether there is a costumed crimefighter deficit in your area, there is the World Superhero Registery.

Note that despite the Times articles implication that this is a strictly American thing, there seem to be several in the UK at least.

1 There IS a reason I'm called "Wonderduck", but it has nothing to do with being a superhero.

Purple Squirrel No really. A purple squirrel. (via) 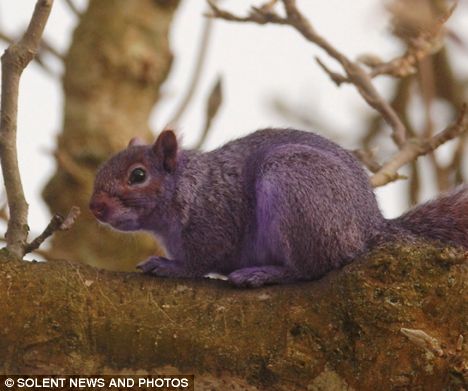 Multitudinous Mammaries Mysteriously Missing A large shipment of inflatable boobs has gone missing en route to Australia.
They must be located in 2 days or they will miss their deadline. No.Really. 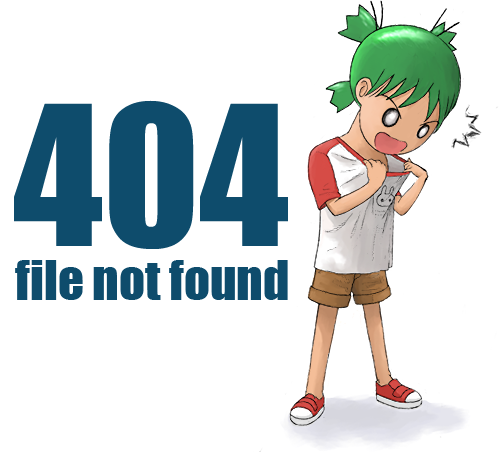 Character in pic is Yotsuba Kiowai from Yotsuba&! 404 shop was shamelessly nicked from 4-chan.

And I Just Ate Too.... A pig with a monkeys face has been born in China.
Now a deformed farm animal is not normally news but the picture was disturbing enough to make me shiver...thus it warrants discussion about this stories implications.

The way I see it there are 5 possibilities here...
1: It is a bizzare but random mutation, the snout and jaw, shortened enough to give the piglets face an almost human face and the Brickmuppet nightmares.
2: As above, but not quite as random, having been triggered by the appalling pollution levels in parts of China.
3: This was an in vitro fertilized pig and due to incompetence at a government facility this farmers sow was accidentally impregnated with one of those human animal hybrids that Leon Kass gets the vapors over. This is possibly part of a program to grow transplantable organs or to make Chinese pigs taste even more like pork.
4: Its a pod pig.... the  Body Snatchers are in China. Head for the hills. Trust no one.
5: It's a pig thing...you wouldn't understand...but you should react as in #4.

Scenarios 1&2 can be safely dismissed in the interest of fearmongering and hysteria. #3 is disturbing in a Soylent Green / Clonus Horror sort of way but points (tangentially) to the distant possibility of catgirls being developmentally just around the corner. Scenarios 4&5 pretty much just suck and have no silver lining that I can see....
Anyway, discuss....

"NEVADA TAN" to be freed. I can't stop myself from thinking that this is going to be like the "Escape of the Bat Child" for the 4-Channers.

The Sasebo Slasher, referred to by authorities as "Girl A" and better known to many on the internet as Nevada-Tan has reportedly has had her umm... "freedom restrictions" lifted as of Sept.14th.

The girl, now 15, fatally stabbed a 12 year old classmate with a box cutter 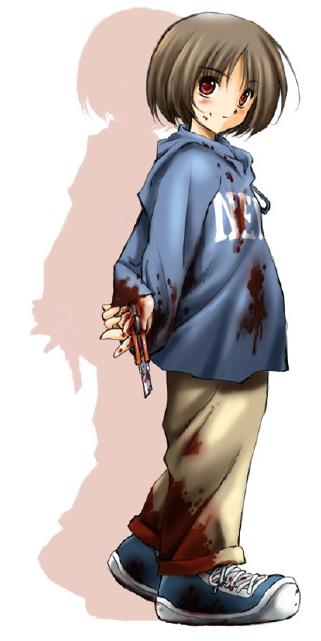 when she was 11.
Because it involved girls of such a young age, this story shocked Japan.
Because the girl was a gamer, a fan of the film Battle Royale, and frequented some of the more gory nooks and corners of the internet, the  murder  had a similar effect on public perceptions of fandom as the Myazaki killings of the late 80s.

As a testimony to the well adjusted  psychology of these here interwebs, the Otaku connection in this sad tale catapulted the unnamed young girl into celebrity status, inspired morbid fan art like the uncredited piece to the right and massively boosted the sales of  University of Nevada pullovers...I've tastelessly used this meme myself from time to time but it is a good day to reflect on  the forgotten person in all this, Satomi Mitarai, whose life was cut short by the whole sad affair.
.

I am not a forgiving person when it comes to crimes particularly capital ones, but given her age and the better than even chance that this was actually a vicious catfight that became manslaughter, I hope that this girl can maintain her anonymity and lead something of a normal life.

(..and not stab anybody else.)

But Mark Styen does!

OK, this may be a fake, as Wonderduck points out via private communication, the sheriffs name is Mr. Whipple.

Medea Benjamin, one of the organizers of the code pink protests in Berkeley, knows who to call when she's threatened.

Send in the Marines!!


This tale of hypocritical harridanry comes to us via Chaotic Synaptic Activity who also brings us this inspiring tale from the other end of the ethics scale .

Leyde couldn't believe it when he scratched a winning ticket, but he still plans to return to Iraq.

"It was a commitment I made about three months ago. I'm going to stick to it," Leyde said about his decision.

"No really....I said I'm running a Dwarven Thief." Yes indeed Brickmuppeteers, it's the old* "hide the dwarf in the luggage so they can rob the baggage car scam".


*No, really,  it is an old trick. As Pulpjunkie pointed out when I sent him this story, it was mentioned by Houdini in his how-too book on crime.

Bfwssspffftttt.... That's the sound of me spewing ITOEN Green Tea in front of the cybercafe baristas....

Come ON people....I mean LOOK AT THE FRICKING PHOTO! 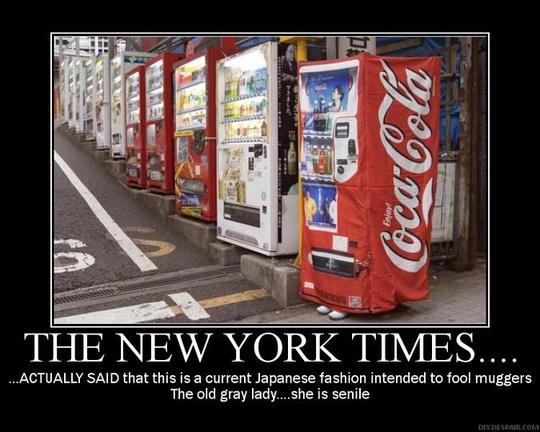 (The actual caption reads: Though street crime is relatively low in Japan, quirky camouflage designs like this vending-machine dress are being offered to an increasingly anxious public to hide from would-be assailants.)

Golly willakers! I THOUGHT there were a lot of vending machines over there....I guess I was just not noticing the little tennis shoe shod feets poking from under their cunning disguises.

DAMNIT!! I suck as a ninja!

In all seriousness, this is really kind of alarming.

Bill Keller....put down the crack pipe and move away from the paper.


Actually, when I was in Japan in August, the main thing that people were concerned about crime-wise was a rash of motorcycle thefts.....and children riding double on bikes. One night I missed the last train out of Shibuya, and just wandered the streets of Tokyo for 6 hours overnight. I never felt the need for an ersatz vending machine.
(Though to be honest, I never really gave it any thought)

HT: Chizumatic...who also points out this article that proves that a story can be dumb, bizzare and silly, yet still be actual journalism.

Cold Hollow Husks... ...that appear to be human and prey like lampreys upon those of us with souls are more common than is generally assumed.

This is an extreme example, but I encountered, both firsthand and with varying degrees of separation, similarly bizarre stories over the past 15 years.
I must say though that this story really is a perfect storm of crazy.
In my (admittedly limited experience) fandom in particular seems rife with this sort of thing.

via Colleen Doran who has a good discussion in the comments.

The order of the Knights Templar has been absolved of heresey!

It now appears that most of the acusations against the Knights Templar were part of an elaborate scam perpetrated by a French King (Phillip the Fair) who owed them money (and later went on to persecute French Jews).

Fortunately the Vatican has gotten to the bottom of this scandal and cleared their names (of that charge at least).

(Via Instapundit, who points out that it does put the Duke Rape Case in perspective)

Ben Carpenter got the ride of a lifetime when his electric wheelchair became lodged in the grille of a semitrailer and was accidentally pushed down a highway for several miles at about 50 mph.

Update: It was a Mack truck....not a Mac truck. Steve Jobs is innocent