One Hopes That There is a Special Concierge Service in Hell To Give These People the Extra Attention They Deserve Suburban Banshee has an extensive, link-heavy post on the utter monstrousness of Marion Zimmer Bradley, child molester and protector of her child molester husband.
Go read the while thing.

I mentioned this to my friend BOB! last night and he said that he'd heard about a lot of this years ago and had written off the author for that reason. Another friend mentioned yesterday that she'd known about enough of this for years that she had long ago burned Bradley's books.
I, on the other hand, had muddled trough life blissfully ignorant of this.
It's a squalid, foetid affair that involves a couple of truly evil people. That word "evil" gets bandied about a lot, but this is the real deal.
But the reason I'm most angered by this is that the story is actually far worse than the depredations of 2 fiends.
What is REALLY disturbing about this is the fact that elements in the Sci-Fi community had been covering this up since 1963. Oh, they had banned Breen (Bradley's eventual husband) from a con, but no one bothered to call the cops.
This passage from the letter is particularly disturbing...After laying out the fact that Walter Breen is a CHILD MOLESTER, he suggests that Breen be...get this...banned from a con.

I came to this conclusion most reluctantly. I have no axe to grind. And quite apart from my emotional reluctance, I expect some of my friends to get mad at me if I do anything about Walter. Others will be "disappointed" in me because of my "persecution" of Walter, poor innocent Walter who loves and understands children. Also I rather expect some damage in my race for TAFF in 1965.[/quote]

You know, I have something to say to the author of this letter....
Hal 9000, Skynet, and the Krell mind machine, combining their processing power and crunching numbers for a decade could not calculate all the fucks I do not give about your fanboy electioneering. You have, with that paragraph, proven yourself to be a soulless, malignant waste of skin that could be put to vastly better use by burn victims. You know of a child molester and you do not report it to police because you are afraid it will harm your popularity? If ratting out a pederast will endanger ones social standing, then I suggest that it is time to get another peer group. You have no axe to grind? ARE YOU HUMAN?
This was 1963. How many children were raped because no one on this mailing list had the spine to call the cops? (ed: at least 22) Why in the hell didn't SOMEONE call the authorities? Is it because as a member of fandom you'd been bullied and didn't want to cast judgements? If so you deserved every wedgie you got and more...far more. This was not being a beatnik, or some other alternate lifestyle, this was children, and this was a hell of a lot more children who suffered agony and terror because not ONE person in this circle of fen had sufficient ethical grounding to call the police.
The Kitty Genovese story was utter bunk, but this is as real as it gets.
You know what's almost as disturbing than that?
This. 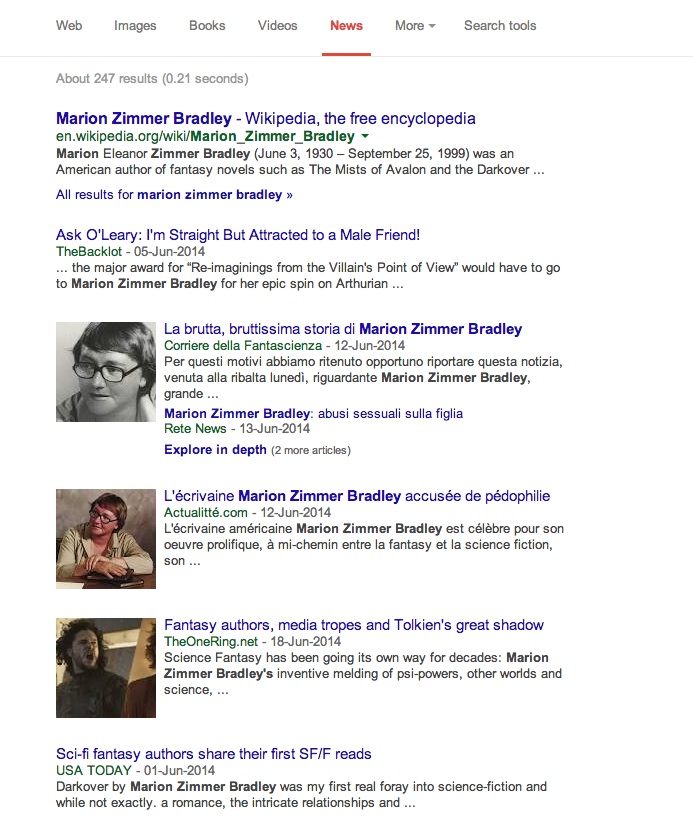 No news here, just a couple of glowing testimonials...well, the only people covering this are the French and the Italians.
Someone from Google must be an MZB fan.
I guess it's OK to be a servant of Moloch as long as ones politics are correct.
Evil people exist in this world, that is a fact, but those fiends do far more harm when they are willingly enabled by the morally bankrupt.
This mental cancer is not just the purview of maladroit fanboys either.
In fact, I think this is a very good time to remember the tolerant non-judgemental, open minded and caring people who signed the Roman Polanski petition to excuse a man for raping a little girl.

1 She also has fans who regularly delete any mention of this from her Wikipedia entry, although you can see it in the history if you look.