I've Been Killing Slimes For 300 Years And Maxed Out My Level This is a show that delivers EXACTLY what it promises. 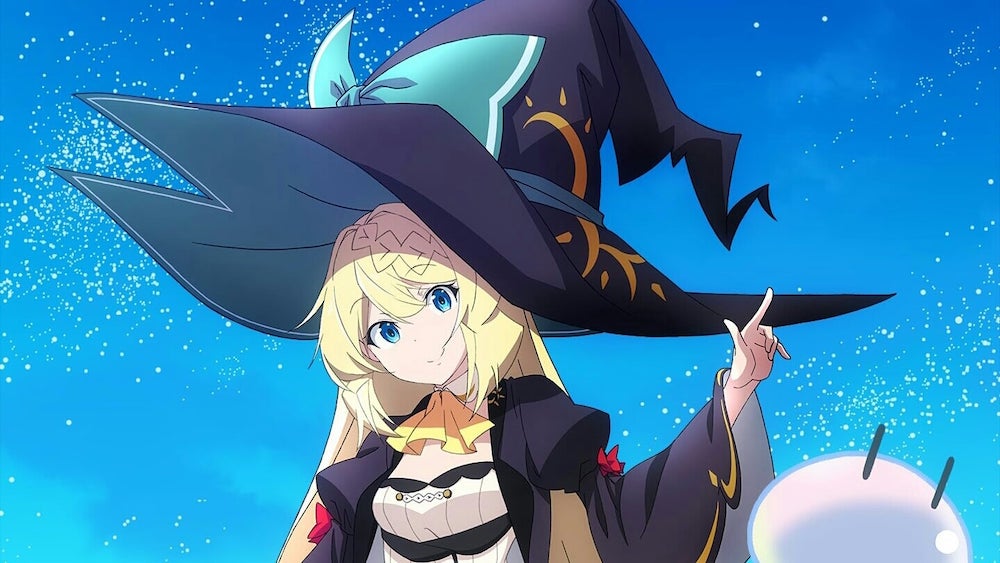 The hat is just a bonus.
Aizawa Asuza, aged twenty seven is an office lady who keels over dead from overwork after several consecutive allnighters. As our heroine mopes and presumably blows bubbles in Samsara while contemplating her meaningless, completely avoidable death, a random goddess shows up and informs her that because of her incredible dedication and said goddesse's boredom our heroine is going to get  Isekaied to a world that the goddess has as a side project.  Aizawa pleads not to forget what she's learned. "WISDOM!" the goddess rewards her with some more requests. Our heroine asks to live out in the country, on a farm and not get old and decrepit.
For some reason, instead of granting Aizawa a quick death, the Goddess sets her in a isolated farmhouse about an hours walk from a town with an adventurers guild, makes her a Witch, and gives her knowledge of a regeneration/immortality spell.
Ecstatic that she is now living in the country Aizawa Asusa  resolves to NEVER do any work again aside from growing food. Her life lesson from her previous life is the importance of leisure! She will not forget that valuable bit of wisdom.
To her horror, she realizes she has to buy seeds, so she goes into town and along the way, she is attacked by a slime! The weakest of monsters is no match for a Witch and she notes that the little monster's death rattle produces a gem. After getting what amounts to a hunting license (joins the town adventurer's guild), she is able to turn these in for what amounts to money...which in turn can be exchanged for goods and services.
300 years pass, the economy apparently sucks as there has been no expansion of the town or notable sprawl. Aizawa goes into town every few days to turn in slime guts to the local adventurer's guild and buy stuff.  During these three centuries our heroine becomes something of a local institution as that Witch in the woods with the hat: a farmer reluctant healer, and strict hermit. She has kept to herself mostly but has helped out the local town enough times that she is well liked despite being quite asocial.
She's in heaven. No schedule, long nights of sleep and leisurely gardening are her order of the day. She does NOT get bored with this...until one day the girl who processes bounties at the local adventurers guild  asks to check our protagonist's "level" for records purposes.
It turns out that Asusa Aizawa has, over 300 years, killed enough slimes (and cast enough heals presumably) to have reached level 99...the maximum possible. That's remarkable. (Moreso if you play these video games.) Now this Podunk Adventurer's guild in the sticks has a level 99  that means prestige, and....challenges....you know...WORK.
Aizawa convinces the guild representative to keep her level secret as payment for having saved her life off camera.
Sadly the secret gets out, numerous adventurers looking to make a name for themselves show up to challenge the level 99 Witch. Her "secret" becomes spectacularly and pyrotechnically public, and finally a Dragon showes up...to...D...D...D...DDDDD...DUEL!
That was a cute first episode. I don't think it's going anywhere. It looks to be developing into a formula show. The dragon, named Laika, is ignominiously defeated, but destroy's our heroine's house while writhing around with 'brain freeze'. Later, Laika takes the form of a cute girl, rebuilds Asuza's house and massively expands it to accommodate....a Dragon. You see the Dragon want's Asuza to take her on as a pupil as she believes she has much to learn from the human who is level 99 and defeated a frickking dragon. Asuza resists until Laika offers to be a live-in servant in exchange for bits of wisdom. Thus far her wisdom is mostly "Don't work too hard" and as the episode ends the Witch of Leisure is well on her way to destroying the bright young dragon's work ethic. The final credits hint at numerous other pupils. Frankly this is kind of Mary Sue, though the ridiculousness of the ease with which our heroine became so OP is not skirted. (In that sense it's actually a notch above most Isekai shows.) There is a bit of an indication that our heroine may in fact have some lessons to learn, as she has rather overcompensated for her earlier mistakes to the point of sloth. There appear to be numerous light novels in this series indicating it may have something to say, but I'm not expecting much. Still the pilot was stupid cute fun and a Cute Girls Doing Cute Things ... Isekai fantasy is something I did not have on my bingo card. So I'll watch at least a few more.

1 If you're expecting Pokemon only the MC is collecting cute girls, you won't be disappointed.

3 I have been reading the light novels, and an isekai slice of life where the main plot is Azusa (Not to be confused with Azusa from The Idolmaster.) collecting cute monster girls....Would be the long and short of it.